Breast carcinoma metastasis in a resected meningioma with early diagnosis of oligometastatic disease: a case report

Tumor-to-intracranial tumor metastasis is a known but rare phenomenon, with relatively limited representation in the literature (1). This scenario is most likely to be witnessed with indolent tumors being seeded by an aggressive or widely metastatic carcinoma (2). The most common intracranial tumors to receive distant metastases are meningiomas, with breast carcinoma being the most common donor (3). The incidence of this occurrence is likely underreported, given the limited ability to evaluate beyond histopathologic confirmation, the high threshold to pursue neurosurgical intervention in asymptomatic patients, and increasing survival times with modern systemic therapies (2). The significance or mechanism of this process is not completely understood. In this study, we present the following case of a 56-year-old woman with an intracranial meningioma found to be seeded by previously-treated breast cancer primaries leading to the diagnosis of oligometastatic disease.

The authors are accountable for all aspects of the work in ensuring that questions related to the accuracy or integrity of any part of the work are appropriately investigated and resolved. All procedures performed in studies involving human participants were in accordance with the ethical standards of the institutional and/or national research committee(s) and with the Helsinki Declaration (as revised in 2013).

A 56-year-old female patient presented with left lower extremity weakness and focal motor seizures. Evaluation revealed bilateral diplopia for the preceding two months and headaches for the past week. Her past medical history was remarkable for bilateral invasive lobular breast carcinoma, estrogen receptor (ER) and progesterone receptor (PR) positive, HER2-negative, both treated with surgery, chemotherapy, radiation, and hormonal therapy five years (right breast T3N1M0) and two years (left breast T1cN0M0) prior to presentation, respectively. Magnetic resonance imaging (MRI) of the brain revealed a large, extra-axial, homogenously-enhancing mass in the right middle cranial fossa, measuring 4.9 cm × 6.5 cm × 5.4 cm (Figure 1), with 1.4 cm midline shift and mild bowing of the sphenoid cortex into the orbit, consistent with meningioma. The patient underwent image-guided craniotomy with access through the root of the right zygoma. The mass was devascularized, sharp resection performed with extensive cauterization of the surrounding dura, and postoperative computed tomography (CT) of the head suggestive of gross total resection. 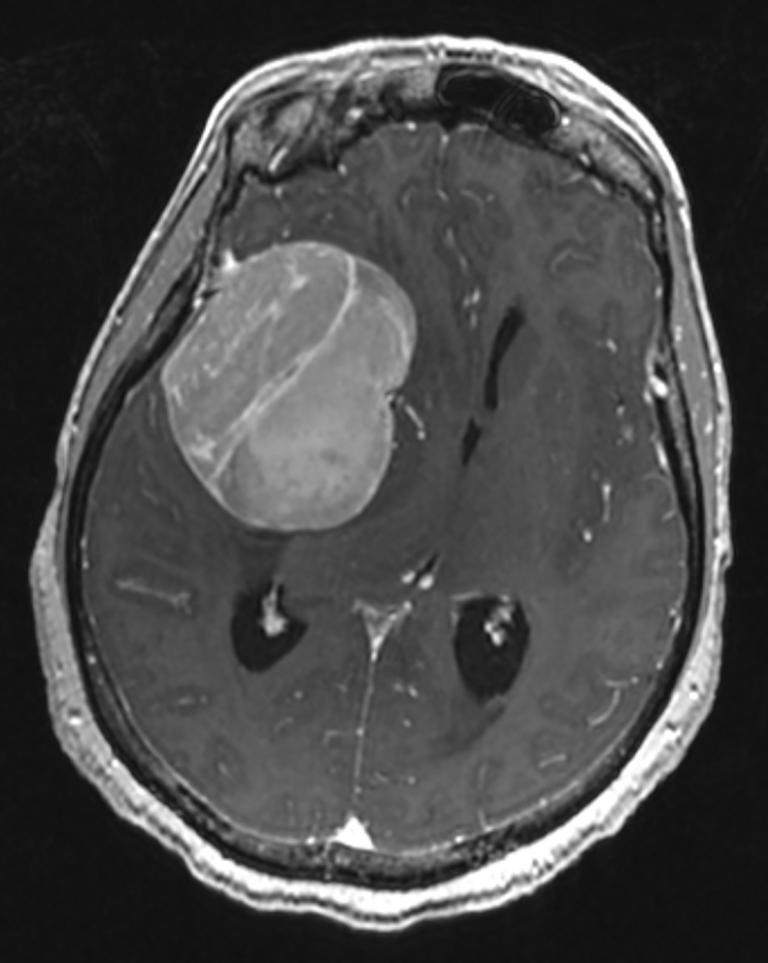 The final pathology report of the resected neoplasm revealed a World Health Organization (WHO) grade I meningioma (Figure 2A) with a Ki-67 proliferation index of 6.4%. Due to some morphologic overlap with schwannoma, confirmatory immunohistochemical stains were performed. Immunohistochemistry for S100 was negative, while EMA showed mild diffuse immunoreactivity supportive of the diagnosis of meningioma (Figure 2B). However, there were rare individual and small clusters of darker-staining epithelioid cells within the meningioma that were not otherwise appreciated on the original hematoxylin and eosin (H&E) stained sections (Figure 2C). By careful alignment of the EMA-stained cell clusters with the H&E-stained sections, small linear clusters could be identified that were morphologically consistent with lobular breast carcinoma. Breast markers GATA3 and GCDFP-mammaglobin (Figure 2D,E) confirmed the presence of metastatic lobular breast carcinoma. Additional immunohistochemistry for breast markers showed these tumor cells were positive for ER and 2+ HER2/Neu staining (Figure 2F). Dual in situ hybridization for HER2/Neu and PR staining were non-contributory due to the inability to reliably distinguish rare, scattered, breast carcinoma cells from meningioma cells, and diffuse meningioma PR positivity. 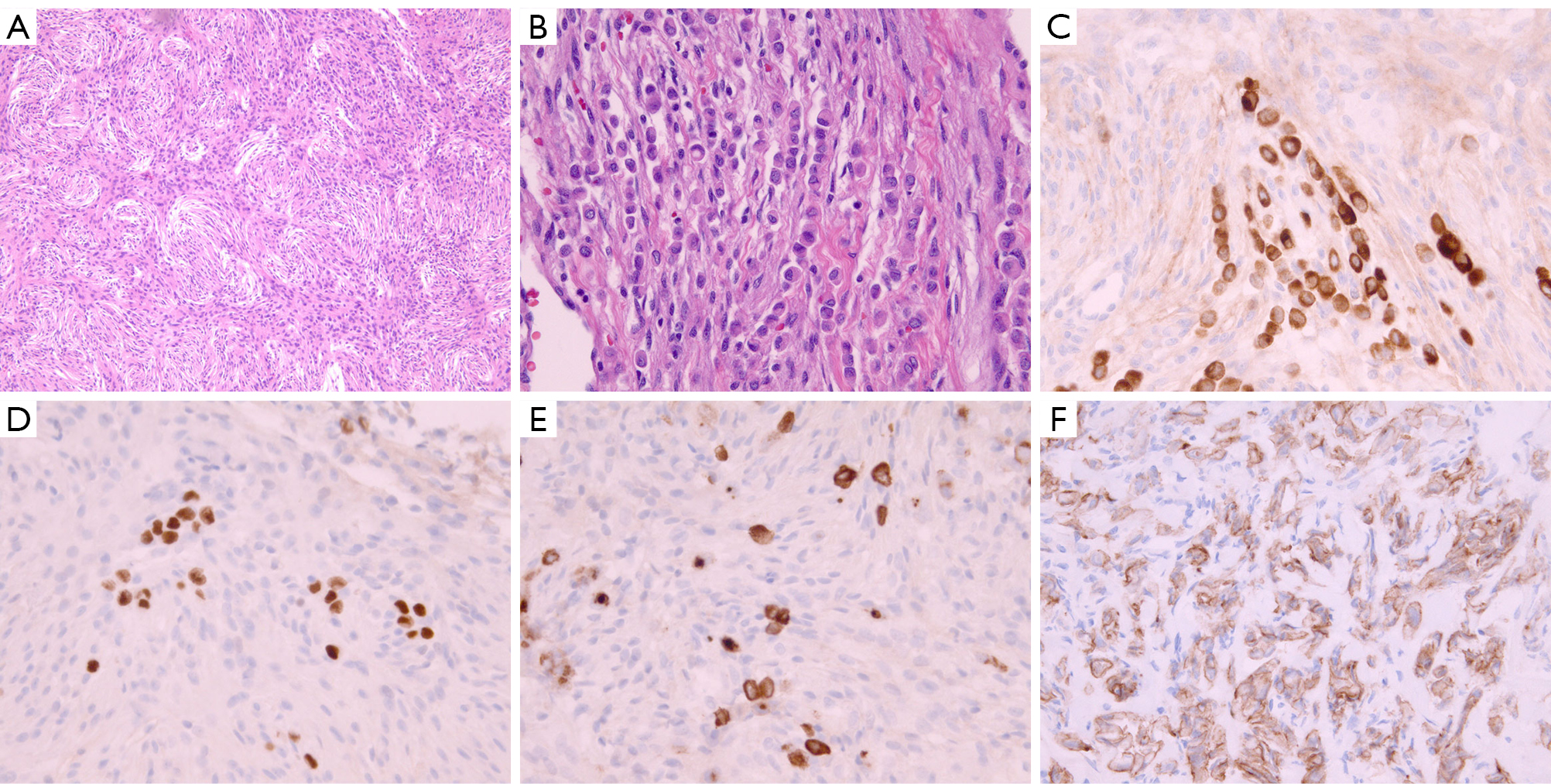 The patient was referred to radiation oncology for evaluation of adjuvant radiotherapy (RT) to the resection cavity. Given the presence of metastatic breast cancer, stereotactic body radiotherapy (SBRT) was recommended. MRI was obtained four months after resection, which revealed significant reduction in the resection cavity and a questionable, small residual meningeal nodularity in the posterior resection cavity on T1 post-gadolinium sequences. She was treated to a total dose of 30 Gy in five fractions using volumetric modulated arc therapy (VMAT) in three arcs, flattening-filter-free, prescribed to the 98.6% isodose line. She completed RT without acute toxicity, and subsequent complete resolution of presenting symptoms. PET scan one month after RT revealed a single, sclerotic, osseous lesion at L3, and she was referred to her medical oncologist and started on systemic therapy. MRI of the brain three and six months after RT revealed post-treatment changes without evidence of recurrence (Figure 3). Repeat staging scans revealed no other areas of disease. She continued to be without intracranial recurrence and received systemic therapy until three years after RT, when she suffered a myocardial infarction and expired. A timeline of care received by the patient is available in Figure 4. 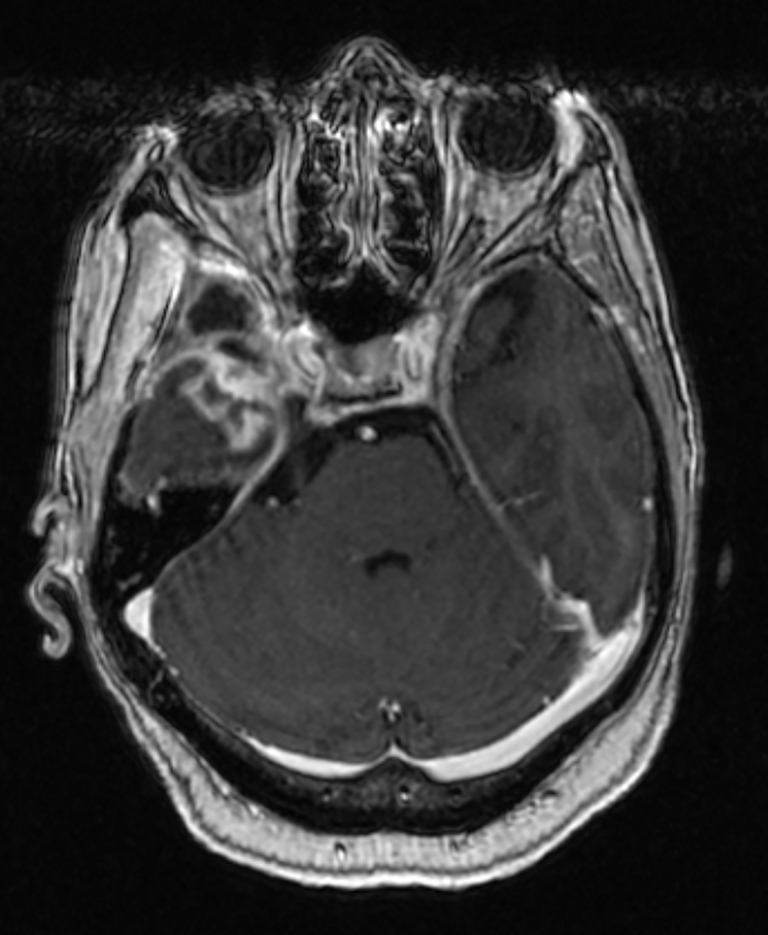 In the 1930s, tumor-to-tumor metastasis to meningioma was first recorded by Fried BM (5). Of the total cases reported since, over 70% involved meningiomas, of which nearly half involved breast cancer metastasis (6). The prevalence of this phenomenon is postulated to be partly from the overlapping epidemiology of patients with breast cancer and meningiomas (7). In addition, the Swedish Cancer Registry and the United States Surveillance, Epidemiology, and End Results Program (SEER) reported an increase in the diagnosis of meningiomas after diagnosis of primary breast cancer, although this is likely a manifestation of increased brain imaging (8). Meningiomas are mostly slow-growing, hypervascular intracranial tumors. Such characteristics increase the chances of meningeal seeding via hematogenous spread. They have high lipid and collagen contents and lack a reactive immune response against foreign bodies, creating an optimal seeding environment (2,9-11). These factors may explain why meningiomas are the most common benign intracranial tumor to accept distant metastases (12).

The prognostic impact of tumor-to-tumor metastasis remains unclear. Unique to our case was the diagnosis of metastatic disease from meningioma resection and oligometastatic disease burden upon further work-up. Post-surgical RT in the presented case demonstrated efficacy in local control. The patient continued to experience relief of symptoms following surgical resection and RT, and limited extracranial disease. This outcome is seemingly discordant to many of the similarly-reported cases. The majority of reviewed cases describing tumor-to-tumor metastasis from breast carcinoma to an intracranial meningioma report diffusely metastatic disease, worsening of presenting symptoms, poor local control with RT or systemic therapy, and eventual mortality, or do not mention outcomes (2,5,7,9-12,14). This is likely due to the early diagnosis of oligometastatic disease, rather than heavily pretreated, widely-metastatic disease, as in other reports. Given the constellation of factors that facilitate breast-to-meningioma metastases, and low resection rates of meningiomas among metastatic breast cancer patients, it is questionable if the prognostic significance, if any, will ever be elucidated. Patients with prior history of malignancy, especially breast cancer, who undergo resection of meningiomas warrant close pathologic examination, even without history of metastatic disease, as demonstrated by our case report. Further publications of similar cases should provide detailed documentation regarding clinical factors, pathology, extracranial disease status, and prior treatments to best characterize this phenomenon and factors associated with their occurrence.

In conclusion, we present a case of tumor-to-tumor metastasis from invasive lobular breast carcinoma to meningioma that resulted in the early diagnosis of oligometastatic, breast cancer. Careful pathologic examination of resected meningiomas in this patient group is warranted. Future reports should include detailed information regarding patients, pathology, disease control, and treatment history.

We thank Kinga Skowron, MD, for her critical proof readings.

Reporting Checklist: The authors have completed the CARE reporting checklist. Available at http://dx.doi.org/10.21037/cco-20-122

Ethical Statement: The authors are accountable for all aspects of the work in ensuring that questions related to the accuracy or integrity of any part of the work are appropriately investigated and resolved. All procedures performed in studies involving human participants were in accordance with the ethical standards of the institutional and/or national research committee(s) and with the Helsinki Declaration (as revised in 2013). Patient consent was obtained and information reported as per approved IRB #18D.480.