Epithelial ovarian cancer (EOC) is a common oncological disease with a life-time risk approaching to 1:70 (1). It holds the fourth position in the structure of cancer mortality in women (2). Small ovarian tumours usually cannot be reliably detected by conventional diagnostic tools and do not cause symptoms. Therefore, the majority of EOC cases are diagnosed at advanced stages, which possesses a significant challenge to the disease management. However, unlike many other cancers, EOC rarely produces multiple haematogenous metastases, but spreads mainly along the surface of peritoneal cavity. Furthermore, EOC is usually highly sensitive to platinum compounds. These properties of ovarian tumours provide an opportunity for effective disease management by combination of surgery and therapy: in fact, women with bulky EOC have evidently better life expectancy as compared to patients with other common malignancies of advanced stages.

EOC usually presents with non-specific symptoms, which are caused by tumour-related compression of neighbouring organs, ascites and pleuritis. The health complaints may include abdominal bloating, abdominal and pelvic pain, loss of appetite, change of bowel habits, fatigue, shortness of breath, urinary symptoms etc. The primary diagnosis of EOC is usually established by CA-125 marker measurement and ultrasonography (3).

EOC are classified for serous, endometrioid, mucinous and clear cell histological types. In addition, there is a division of EOC for high-grade and low-grade tumours. Serous and endometrioid high-grade carcinomas share biological and clinical properties, therefore they are rarely discussed as separate disease entities; these tumours usually carry TP53 mutations, often arise via inactivation of BRCA1/2 pathways, are characterized by rapid tumour spread and demonstrate high sensitivity to platinum chemotherapy. Non-serous and/or low-grade EOC contain distinct spectrum of genetic abnormalities (BRAF, KRAS, PI3KCA, ARID1A etc.), tend to be somewhat more localized and show limited response to conventional drug schemes (4). Low-grade and non-serous EOC are classified as type I; these tumors are relatively slow-growing and more likely to be detected by ultrasonography. High-grade serous ovarian cancer (HGSOC) belong to the type II category: they are characterized by aggressive growth and extensive metastatic spread (3).

Low-grade and/or mucinous EOC of stage IA–B can be managed by surgery alone, given that the risk of relapse is moderate and the sensitivity to adjuvant therapy is low anyway. Fertility-sparing surgery may be considered for young women with unilateral ovarian involvement (5). Patients with HGSOC or clear cell carcinoma usually require administration of systemic platinum-based therapy in addition to surgery (4,6). Surgical cytoreduction is a backbone for the treatment of advanced EOC. Superficial spread of EOC masses on the surface of peritoneum provides an anatomical opportunity for complete or nearly complete resection of tumours masses. Surgery includes total abdominal hysterectomy, omentectomy and excision of visible cancer lumps. Systematic lymphadenectomy allows to evaluate presence of metastases in lymph nodes and specify the stage of the disease. The mere removal of gross tumour bulk is believed to be beneficial for the disease outcome, even if some residual tumour lumps cannot be excised. The life expectancy is significantly improved for those patients, who experience complete removal of visible cancer foci upon surgery. For this reason, extraordinary efforts are often made to achieve so-called complete cytoreduction; this may involve interaction between gynaecologic and abdominal surgeons as well as high-quality intensive care. Wherever appropriate, advanced medical centres utilize extensive upper abdominal surgery, including diaphragm peritonectomy, splenectomy, distal pancreatectomy, liver wedge resection, resection of tumor at the porta hepatis and cholecystectomy (7). Surgical intervention may be accompanied by hyperthermic intraperitoneal chemotherapy (HIPEC) (8). Adjuvant therapy for EOC usually includes 6 cycles of carboplatin/paclitaxel. Efficacy of adjuvant therapy for control of residual invisible OC cells has been demonstrated in clinical trials (9).

Many patients cannot undergo efficient primary debulking surgery (PDS) due to extensive tumour spread and/or high risk of perioperative morbidity. There are approaches aimed to predict individual chances for complete cytoreduction upon PDS. Prospective clinical trials have demonstrated, that CA-125 level and CT examination allow to foresee whether successful PDS is possible. In particular, the chances to achieve complete cytoreduction are decreased in women having elderly age (≥60 years), high CA-125 value (≥600 U/mL) and poor physical status (class 3–4 according to American Society of Anaesthesiologists). Presence of metastatic lesions in the root of the superior mesenteric artery, splenic hilus/ligaments, lesser sac (>1 cm), gastrohepatic ligament/porta hepatis, gallbladder fossa/intersegmental fissure as well as suprarenal ascites negatively affect the probability of resection of all visible tumor lumps. Consideration of these parameters permits calculation of a predictive score, with some patients falling into category of very low feasibility of PDS (10). Some clinics utilize laparoscopic evaluation of potential OC resectability (11).

Women, who do not qualify for PDS, usually receive primary systemic therapy composed of carboplatin and paclitaxel. This systemic treatment is usually referred to as neoadjuvant chemotherapy (NACT), given that the majority of patients demonstrate a dramatic reduction of the tumour spread and therefore become eligible for interval debulking surgery (IDS). Some cancer centres practice the use of HIPEC during IDS (12). IDS achieves higher rate of complete cytoreduction as compared to PDS, however even patients with complete removal of macroscopic tumour lumps have evidently shorter life expectancy as compared to women who became disease-free after PDS. NACT reduces the size of tumour lumps, so some cancer foci are likely to become hidden from surgical inspection. In addition, NACT may result in the selection of platinum-resistant cancer cells thus decreasing the efficacy of subsequent adjuvant therapy. The latter statement is supported by the fact that NACT very rarely results in pathologic complete response (pCR), i.e., in disappearance of microscopic residual disease (13).

Most of patients with advanced ovarian cancer relapse within first or second year after completion of surgical intervention and adjuvant therapy. If the time interval between the last drug exposure and tumour recurrence exceeds 6 months, the relapsed tumour is considered to be platinum-sensitive. Second surgery is feasible for the patients, who have moderate amount of tumour lumps and are likely to achieve complete cytoreduction. This probability correlates with the success of complete tumour debulking upon the first surgery (14). Platinum-based therapy may be composed of carboplatin combined with paclitaxel, gemcitabine, topotecan or pegylated liposomal doxorubicin (2,5,15). Poly ADP ribose polymerase inhibitors (PARPi) are now recommended as a maintenance therapy for the patients with recurrent EOC, who responded to platinum treatment. In addition, PARPi can be administered to women with BRCA1/2-mutated EOC after several lines of chemotherapy (16).

European Medicines Agency (EMEA) has approved a number of indications for the use of an antiangiogenic agent, bevacizumab, in the treatment of EOC. In particular, bevacizumab can be added to the first-line carboplatin and paclitaxel, followed by its single-agent use as a maintenance therapy. Furthermore, bevacizumab can be combined with a standard chemotherapy applied for platinum-sensitive and platinum-resistant recurrent EOC (17). Similar indications are articulated in the Food and Drug Administration (FDA) approval documents (18).

BRCA1/2 status is getting increasingly recognized in the classification and management of ovarian cancer. BRCA1/2 germ-line mutations account for approximately 15% of EOC incidence (19). Screening for EOC in female BRCA1/2 heterozygotes was shown to be largely ineffective, therefore prophylactic salpingo-oophorectomy is a strongly recommended preventive option (20,21). The development of EOC in the mutation carriers involves loss of the remaining allele (so-called “loss of heterozygosity”, LOH). In addition, a significant portion of high-grade serous ovarian carcinomas have somatic inactivation of BRCA1/2 or related genes, which makes them phenotypically similar to hereditary tumours; this phenomenon is called BRCAness. Tumour-selective BRCA inactivation results in the deficiency of DNA double-strand break repair by homologous recombination. This underlies pronounced sensitivity of HGSOC to platinum therapy and PARP inhibitors, which is particularly evident for a subset of patients with the laboratory confirmation of BRCA inactivation. Furthermore, the development of acquired platinum resistance often involves restoration of BRCA function via second mutation or selection of pre-existing BRCA-proficient cells (22). BRCA1/2-related tumors are characterized by genomic instability and therefore produce high number of antigens. Promising results were obtained with the use immune checkpoint inhibitors for the treatment of EOC in BRCA1/2 germ-line mutation carriers (23).

Principles of treatment of primary and relapsed EOC are summarized in Figures 1,2. While considering a historical trajectory of EOC management, it is difficult to anticipate that there will be a dramatic progress in techniques or surgical EOC cytoreduction within next 2–3 decades. Modern EOC surgery critically depends on the manual skills and experience of the physician, requires enormous amount of time and resources, and is likely to remain a bottle-neck in the near future. For the time being, it is more realistic to expect the invention of novel approaches to the early EOC diagnosis, which may result in significant improvement of EOC outcomes. Furthermore, the development of curative therapeutic strategies, which are capable to cope with the (emergence of) platinum resistance, does not look impossible in the era of immune, targeted and high-dose therapy. 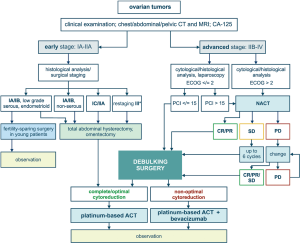 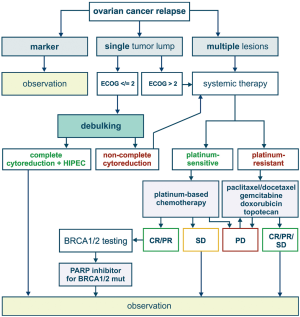