Breast cancer is the most common cancer worldwide and the second most common leading cause of cancer related death among women. Although incidence is generally lower in Asia, it is still the most prevalent female cancer in this part of the world. It is estimated that at least 60% of the world’s 7 billion people are Asians and in particular the fast growing trend of breast cancer incidence in Asia especially China and India where the population is large can impose significant health burden to the society (1). There is an estimated 1.67 million new cases of breast cancer diagnosed in 2012 worldwide and 39% of these are found in Asia (Globocan 2012, http://globocan.iarc.fr/Pages/fact_sheets_cancer.aspx). There is increasing knowledge that a proportion of breast cancer are due to the inheritance of mutations in two susceptibility high penetrant genes, BRCA1 and BRCA2 (2). Women who carry such genetic alterations in BRCA1 and BRCA2 genes has four to five fold increased lifetime risk of developing breast cancer by the age of 70 years compared to general population (45–85% vs. 12.5%) (3). Although most studies on BRCA mutations have been performed in Caucasian or Ashkenazi Jewish cohorts, there are increasing literatures published over the past few years where individual Asian countries have similar frequencies of BRCA1/2 mutations in clinically high risk cohorts which have been tested (4).

Moreover, for decades, the use of PCR based Sanger Sequencing and additional methodology such as multiplex ligation-dependent probe amplification (MLPA) has been the gold standard technique in identifying germline and hotspots mutations (5). With the advent of advanced technology, next-generation sequencing (NGS) based on clonal amplifications coupled with massively parallel sequencing has become more commonly used. This allows the investigation of multiple genes at a lower cost and a faster turnover time (5-7) and facilitates the testing of additional gene mutations both in the germline and somatic setting, hence a huge influx of multigene panels testing has become available both in the commercial setting and academic setting (7-10).

With the increase awareness and knowledge of hereditary breast and ovarian cancer (HBOC), i.e., reduction of cost, turnover time and availability of genetic testing, it is inevitable that genetic testing will have an increase role in Asia. However, the implementation of any health care options less known ethnic cohort may require adaptations and adjustments to established guidelines set for use in Western countries.

The selections for genetic testing of individuals are fairly well defined in Western countries. For mutations such as BRCA1 and BRCA2 mutations or even other high penetrant genes, selection of individuals for genetic testing are mainly based on age of onset of breast or ovarian cancer, the extend of family history of related cancers, and also subtype of cancers, for example triple negative breast cancer for BRCA mutations.

The most well established guidelines would be that of National Comprehensive Cancer Network (NCCN) Version 2.2016 (Table 1). Apart from the clinical indications based on cancer history, a number of genetic risk prediction models have been established, [such as BOADICEA, BRCAPRO, Myriad, Couch (also known as PENN), Shattuck-Eidens and Manchester (11-16)] that can assess the pre-test probability of identifying a BRCA1 or BRCA2 mutation and enable efficient targeting of genetic testing. However these models are mainly designed based on non-Asian cohorts and a number of Asian countries have found the variability of the accuracy in using these models on Asian cohorts leading to the development of Asian based models such as KOHCal which is at present being validated on other Asia cohorts and aims to increase the accuracy of selection of appropriate probands for genetic testing (17). Most Asian countries however would base their selection of probands by clinical criteria (4). 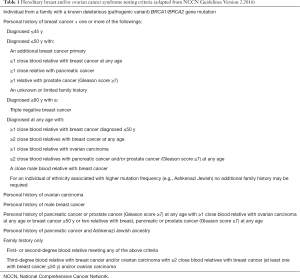 The management of mutation carriers particularly for BRCA mutations is also very well established and for the past two decades emphasis have been on both primary and second prevention, namely screening to achieve early diagnosis or aiming for risk reduction using surgery or medication. For the breasts, mutation carriers for BRCA mutations are usually offered alternate screening options including the choice of intensive breast surveillance (18) (MRI breasts in addition to standard breast imaging such as mammography and ultrasonography), and preventative interventions including the consideration of mastectomy instead of breast conservation surgery due to the increased risk of contralateral breast cancer and the likelihood of increase second primary cancers in the ipsilateral breast in the setting where the individual have already had breast cancer. For risk reduction, options of prophylactic mastectomy and salpingo-oophorectomy, or the prescription of chemoprevention drugs are the main choices. The indications of BRCA mutation testing have become more popularized recently as new data have supported the options of selection of therapeutic management of breast and ovarian cancers based on BRCA mutation status such as the choice of chemotherapy as primary treatments such as the use of carboplatin as a neoadjuvant agent and the evolvement of the use of targeted therapies, such as PARP inhibitors.

However the uptake rate and choice of management in Asia is much dependent on the availability of screening options and MRI are less likely performed in most Asian countries due to lack of resource or availability. Prophylactic surgeries are offered but uptake rates of RRM are much less compared to United States (1).

Genetic counselling plays an important role in selection of individuals suitable for genetic testing, collecting an accurate family pedigree and to explain the process, advantages and disadvantages of genetic testing and its implication not only to the individual but also the family members. Traditional counselling takes a long period of explanation on an individual face to face basis. A genetic counselling requires a 1−2 years training in Western Universities in general but in Asia there is a lack of training for genetic counselling aside from larger countries such as Japan and Korea where there are national and regional training programmes for genetic counsellors (19,20). For most other countries genetic counsellor are usually nurses, psychologist or other allied health workers with certification training in cancer genetics from long distance certification courses or trained by the genetic specialist in the clinical setting locally. With the increase indications for genetic testing, it is likely that like the West, the Asian model of counselling may also have to change base on the needs and local adaptation. The develop of the best implementation of counselling flow will need to be addressed be it the choice of traditional counselling, or newer models using telephone counselling, streamlining other specialties such as oncologist based initial counselling but yet avoiding the misinterpretation of the genetic result and compromising care, would be of utmost importance.

It has also been established that although the prevalence of mutations in genes such as BRCA genes are likely to be similar among different ethnicities, based on studies on BRCA mutations in Asian population to date, there is a discrepancy between the percentages of BRCA1 and BRCA2 mutation carriers, and there is more likelihood of detecting gene mutations which have not been reported (Novel) or are variant of uncertain significance (VUS) (4). It is likely that as genetic testing gets more popularized, the VUS and novel mutation rates will decrease as we get to better understand our cohorts. The characterization of VUS pathogenicity can be based on different algorithms in different laboratories and centers and streamlining this particularly in Asia where there is still a comparative higher rate of detection of such VUS will aid the implementation of appropriate management of these families (21). Apart from BRCA mutations, the inevitable use of gene panels to personalize care for individuals based on genetics would create a forward management options for families at risk. However, the validation and research work on these panels are warranted and is important based on the experience on BRCA testing for use of the panels in ethnicities such as Asians, which to date are still relatively unknown in their world of genetic testing for alternative genes other than BRCA genes.

Apart from the biology of genetic testing, practical issues such as genetic discrimination and cost of testing is still an imminent issue which would have to be confronted in Asia. Unlike the West, genetic testing is not covered by insurance nor government funds in Asia in general and most centers have obtained its resources for testing through research grants and philanthropy as an academic research project (19). Moreover there is no Genetic Information Non-discrimination act similar to that of United States (22) in most countries in Asia, hence unless this is addressed formally, there may be deterrent for genetic testing.

As genetic testing is gradually becoming an integral part of cancer care and to some, even considered as standard of care, for countries such as Asia where genetic testing and management for hereditary cancers are still comparatively at its infancy compared to the West, more attention should be given to performing research in this area and also implementation of a good supporting system in order to benefit more cancer patients and their families.

The author would also like to acknowledge the collaborative work of Members of the ABRCA Consortium and Team members of Division of Breast Surgery, The University of Hong Kong: in particular VY Shin, JW Chen, JC Ho and Department of Molecular Pathology, Hong Kong Sanatorium and Hospital, Hong Kong.