Cancer have been still the leading causes of death globally, thus highlighting the need for public health approaches to combat this health issue (1). For improving outcomes of patients with cancer, innovative treatments and treatment equipment for cancer are developing and evaluating. Clinical trials are fundamental platforms for the development of clinical treatments and guidelines, and practices for cancer management.

The World Health Organization (WHO) launched the International Clinical Trials Registry Platform (ICTRP) in 2006 to consolidate data on trials registered in national and regional registries worldwide, thus providing a single point of access for all clinical trials registered globally. Collected data items differ depending on the primary registry but include at least the data items recommended in the WHO Trial Registration Data Set (TRDS), is publicly available in the registered record for all trials (2). The ICTRP integrates data from various countries and releases them generally in a downloadable format.

There have been many analyses on clinical trials, however most of them were studies using data of the regulatory agency or a clinical trial registry, e.g., ClinicalTrials.gov, UMIN-CTR (3-11). It was limited to a few studies by using ICTRP that focused on specific countries, organs or comprehensive study (12-15). Furthermore, the feature of countries regarding clinical trials for cancer were unknown. In this study, we aimed to examine and descriptively identify the number of cancer clinical trials registered in the world and the fundamental characteristics in Asian 4 countries of China, India, Japan and South Korea, focusing on study characteristics, e.g., phase or targeted size.

The ICTRP was established by the WHO in 2006. The information/data from each trial on the ICTRP website consists of the items detailed in the WHO Trial Registration Data Set (2). At the time that the present study was conducted, 17 national and regional clinical trial registries in Africa, Asia, Europe, Latin America and the Caribbean, Northern America, and Oceania had provided data on registered clinical trials to the ICTRP.

Extraction of data from the ICTRP

This cross-sectional study was performed descriptively. First, we performed an advanced search of the ICTRP database on September 20, 2019. After inputting the disease name in the condition column, data for the corresponding clinical trials were retrieved. In this study, we entered “Neoplasia or Neoplasm or Tumor or Cancer or Malignancy or Malignant” in the condition field. “ALL” was selected as the recruitment status field for the advanced search, and we subsequently analyzed the data from all clinical trials that were retrieved from this search. Of the clinical trials registered with the ICTRP (2), we acquired 80,677 data sets for analysis. The registered records for these studies were downloaded in XML format. For studies that were registered in more than one registry (“duplicate” registration), we included only the record with the earliest registration date (all ICTRP data that are publicly available are automatically “deduplicated”, meaning that duplicate records of trials that were registered in more than one registry were removed). Among the identified studies, we included those with dates of registration between January 1, 2005 and December 31, 2018 and further subdivided them into observational and interventional studies based on the entries in the “Study Type” field. The clinical study data obtained from the above search criteria included all studies from three categories consists of intervention trials, observational studies and others based on WHO-TRDS.

Using descriptive analysis, we assessed the number and proportion of the following items to characterize and evaluate trends from 2005 (the earliest year of registration of a trial in one of the registries included in the ICTRP database) to 2018: (I) cancer interventional studies, (II) non-interventional studies for cancer, and (III) interventional studies for cancer recruited in the Asian 4 countries of China, India, Japan, South Korea. Then, for further analysis of the interventional studies for cancer conducted in Asian countries mentioned above, and the United States (US) from 2016 to 2018, we investigated the following characteristics: the registered clinical trial registry, study phase, estimated target size, and the type of sponsorship (industrial, e.g., pharmaceutical/bioresearch company or non-industrial, e.g., hospitals, university or researcher). Cochran-Armitage trend tests and Chi-squared were used to compare categorical and continuous variables on oncology trials, respectively. The aforementioned analyses were conducted using the R statistical package, version 3.5.2 (16). 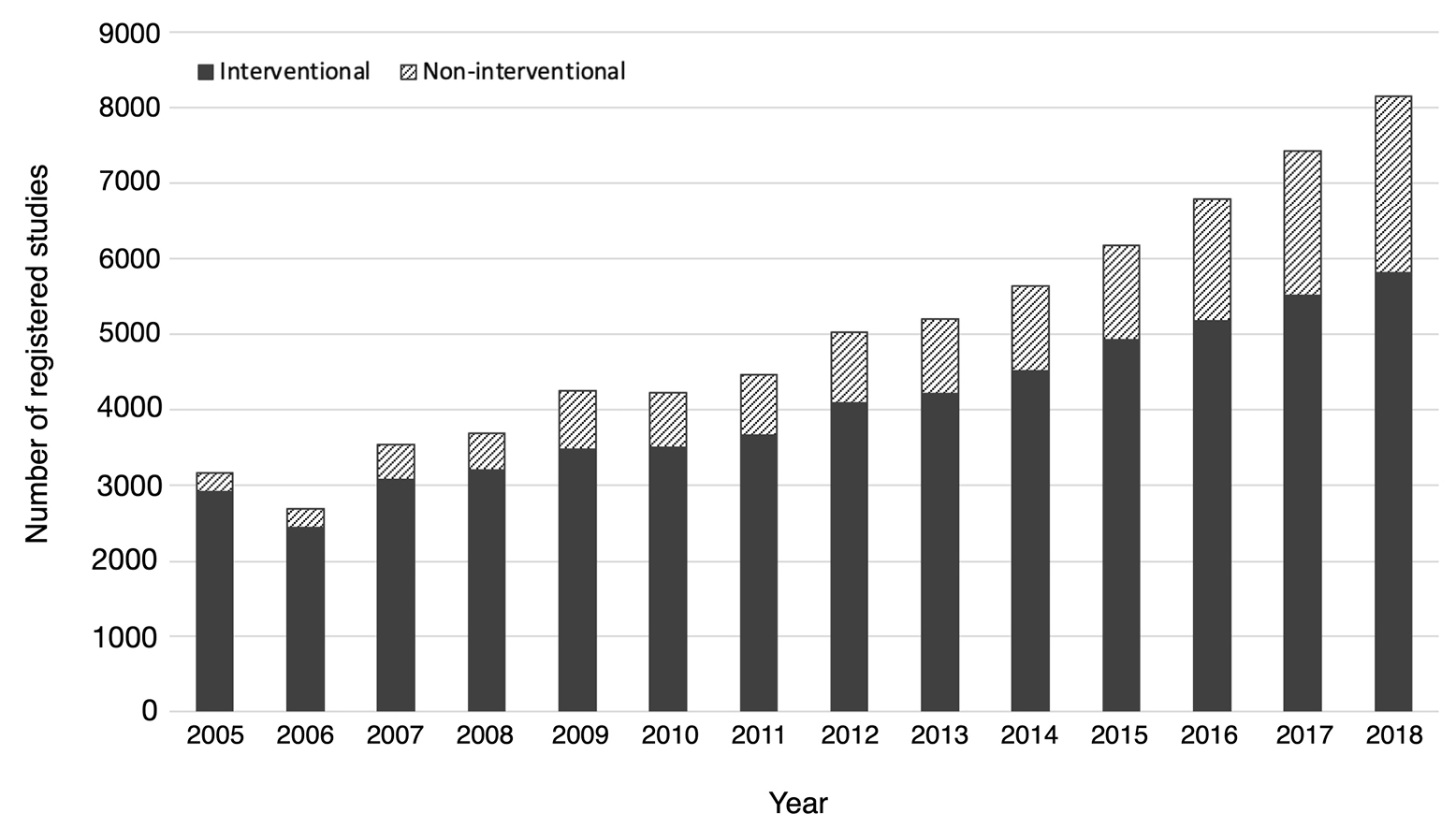 Figure 1 The annual number of registered studies in the International Clinical Trials Registry Platform from 2005 to 2018. 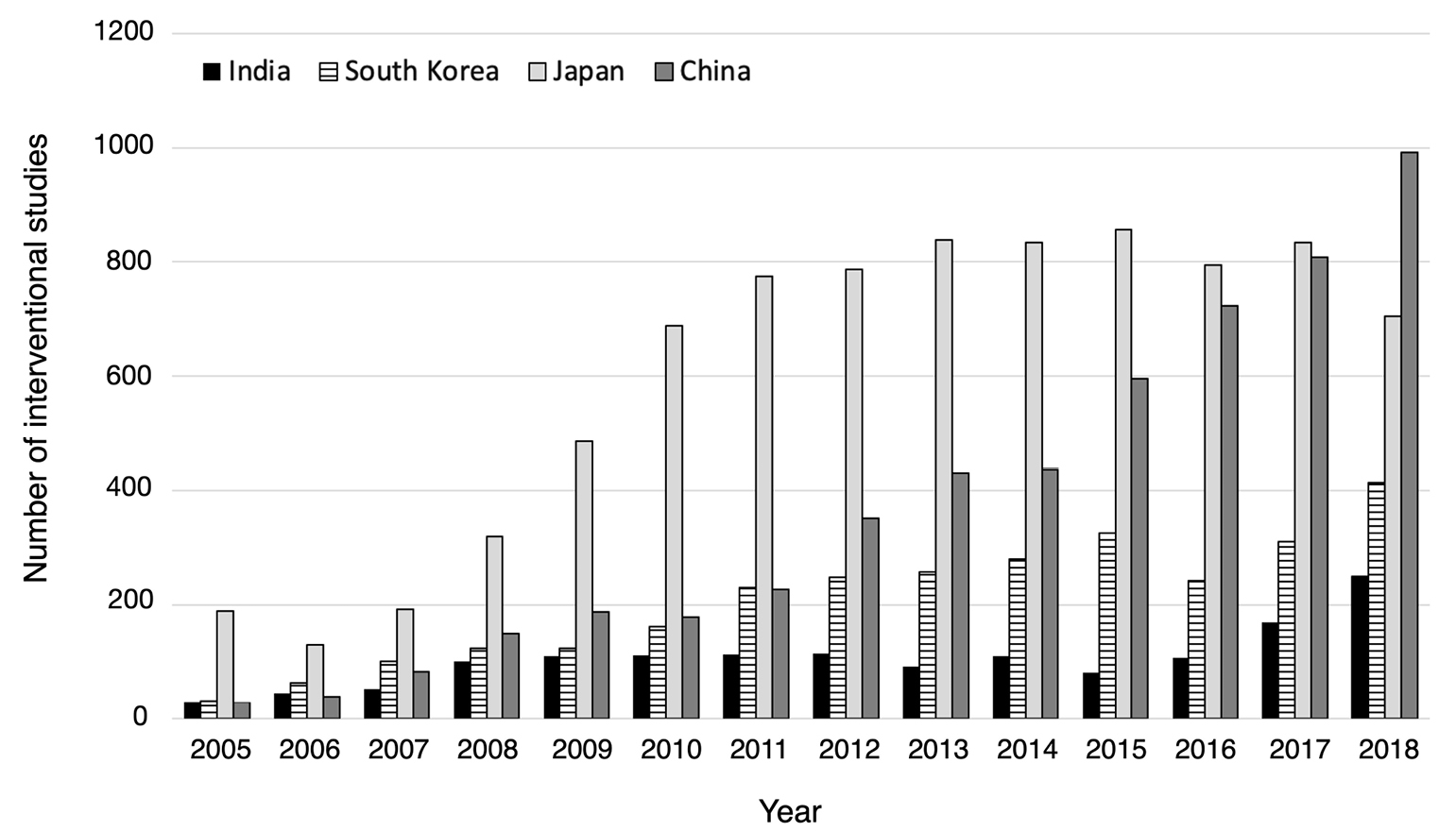 Figure 2 Distribution of interventional studies for cancer conducted in Asian 4 countries which were registered during 2005–2018 from ICTRP. 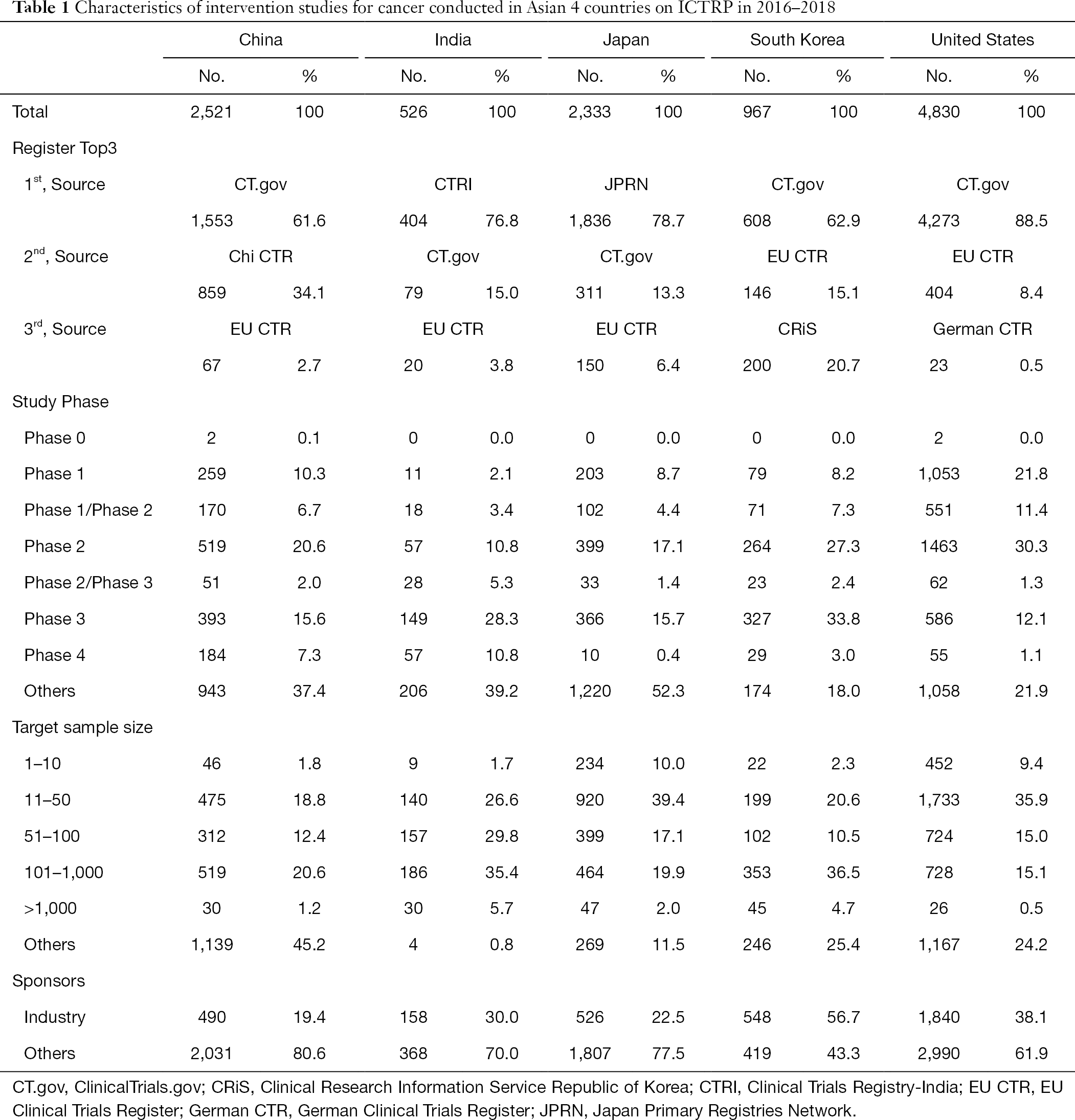 In Asian 4 countries, there were many studies in phase, 3, and in the US, there were many studies in early phases, e.g., phase 1. Prior study reported that the trend in Asian countries is with phase III clinical trials, not for early stage/phase I clinical trials (6,7,11). In this study, we also found that trials with small sample sizes, e.g., 1–50 and early phases, e.g., phase 1 and 2 were frequently conducted in the US.

The majority of the trials enrollment in Korea and the US were sponsored by the industries; however, many clinical trials in Japan and China are sponsored by others (non-industries). Due to the fact that industry-sponsored clinical trials are more common in the US and South Korea, this may be explained by the high proportion of studies registered in ClinicalTrials.gov and EU-CTR that are registries of clinical trials for investigational new drug. In this study, it was clarified the characteristics of cancer clinical trials in Asian 4 countries. Asian countries had the different characteristics. In China, the number of clinical trials has strikingly increased, and there was a possibility that the trend will continue to increase in the future (20). There were a lot of investigator-sponsored clinical trials and trial phase was relatively balanced (22). In India, many large-scale trials with late phase were conducted (6). In contrast, there are many small-scale trials with unclear of the phase in Japan, and there might be many trials on new treatment in clinical practice by clinicians. The number of clinical trials was large, but its increase rate has almost disappeared. In Korea, there are many trials conducted with large-scale, industrial sponsored, at phase 2 and 3 (9).

Our findings lead to a recommendation for the research on clinical trials in Asian 4 countries. The findings suggest considering the characteristics on data in ICTRP and national registry, e.g., ClinicalTrials.gov, for the research. There were founded several variations of cancer clinical trials of Asian 4 countries in this study, e.g., registered registry, phase, sponsor. It is necessary to select a database or data source according to the purpose of the research, and ICTRP might be one of the candidates in those cases.

The strength of the present study was that the data registered in the ICTRP was utilized, thus allowing us to evaluate the number of overall cancer clinical trials conducted globally. Despite these strengths, this study was subject to several limitations. First, the type of intervention was not considered. While there are many types of clinical trials on cancer, such as drug treatment and surgery, diagnosis and prevention, and palliative care, the present study assessed aggregate data on cancer clinical trials. Depending on the type of intervention, factors such as the phase, sample size, and funding source might differ; however, this was not discussed in the current study. Therefore, further analysis might be required depending on the type of intervention type, target organ, and the study purpose. Second, the quality of data may vary among those registries, and not only from country to country (15,26). If there were many missing data, completeness of data might have affected the analysis. In addition, the accuracy of the data also affects the results. Differences in quality control and its procedures (8,26,27) and changes of the registry management systems might affect the quality of data on each registry. Therefore, differences in registered registries may affect inter-country comparisons, and it is necessary to pay attention carefully when handling and analyzing ICTRP data in the future. In a few items that not analyzed in this study, there were uncertain items on the data format. Thus, it would be desirable of continuous quality control in each registry, and standardization, cooperation of registered data inter-registry in the future (26). However, in this study, we could not find that there was obviously difference on items reported in this article between the registries with the exception of the unknown phase in Japanese studies.

In conclusion, our study descriptively clarified an increase and the characteristics of interventional studies for cancer in Asian 4 countries. It suggests taking that characteristics into account and select a database or data source discreetly for analysis of clinical trials, according to the purpose of the research and the required data. In the future, it is desirable to conduct a detailed study based on the differences between the target regions and the content of the interventions.

We acknowledge Dr. Masafumi Okada for his valuable assistance with ascertaining and analyzing the data from the ICTRP.

Conflicts of Interest: All authors have completed the ICMJE uniform disclosure form (available at http://dx.doi.org/10.21037/cco-21-17). The authors have no conflicts of interest to declare.