The saga of lymph node surgery in malignant melanoma: a history repeating itself in gynecologic oncology

Radicality is a dogma in surgical oncology. It has been established for a long that prognosis is directly related to complete surgery leaving no residual tumor. After validation in penile cancers, sentinel lymph node biopsy (SLNB) indication was extended first to breast cancers by Giuliano et al. (1), then later to pelvic malignancies, by Echt et al. in 1999 for cervical cancers (2), by Burke et al. (3) in 1996 for endometrial cancers and in 1994 by Levenback et al. (4) for vulvar cancers. In this perspective, the significance of nodal disease and consequently the indication of surgical removal of regional lymph nodes is a central issue in the management of skin melanoma as much as in gynecologic malignancies.

In the surgical management of melanoma, a distinction must be made between two areas. On the one hand, there are the margins of resection of the tumor itself, which vary according to the thickness of melanoma. The current recommendations of wide local excision of primary tumours with 0.5 cm safety margins for in situ melanomas, 1 cm margin for tumours with a thickness of up to 2 mm, and 2 cm for thicker tumours (5). According to the current ESMO’s recommendations, reduced safety margins are acceptable in order to preserve function in acral and facial melanomas (6).

On the other hand, there is the size of the tumor which requires a complementary lymph node procedure. Regarding regional lymph nodes, SLNB is recommended for precise staging in melanoma of AJCC eighth edition stage pT1b or higher, i.e., with a tumour thickness >0.8 mm (6) or with a tumour thickness of <0.8 mm with ulceration (7). The improvement of knowledge concerning natural history has led to a continuous evolution of the indication, the extent and the technique of lymphadenectomy.

Scientific publications dating from the end of 18th century have reported that melanoma progresses sequentially from primary site to the regional lymph nodes and then to more distant sites. Consequently, early removal of regional nodes could interrupt the metastatic cascade. Based on that, routine complete regional lymph node dissection (CRLND) was initially recommended in all patients presenting with malignant melanoma, even without clinical evidence of regional lymph node metastasis (8).

This aggressive and binary attitude has been contradicted by evidence. Indeed, regional lymphadenectomy is not associated with a substantial improvement in survival of the patients whatever the timing of its performance (primary or delayed).

In addition, Sim et al. (9) have shown in a prospective randomized study that 80% of patients undergoing CRLND have complications. The complications most commonly described were wound infection, chronic lymphedema, nerve injury and anesthetic complications (10). The total cost of care for melanoma patient’s undergoing CRLND was at least fivefold the cost of wide excision only (10). The remaining 80% are exposed to a substantial risk of short and long term complications without any benefit in contrast only 20% of patients are expected to have metastases in the regional nodes (9,11,12). In addition, if metastatic melanoma does not invariably spread first to the regional nodes, elective complete lymph node dissection (ECLND) may not be justified in all cases. The question that was raised at this point in time was: how could patients eligible for CRLND be identified? At the same time, the concept of SLNB that had been first investigated in penile cancer (13) began to emerge in stage I malignant melanoma cases (14) with the main objective to reduce surgical morbidity while achieving a similar oncological and outcome.

To answer the question, Morton et al. have conducted a prospective and multicenter study in order to evaluate the pertinence of SLNB in this indication (15). This study reported on 1,135 patients. SLNB was detected in 97% of cases after a learning curve requiring 30 patients to reach this number. The authors concluded that SLNB is a feasible and reliable technique to select patients eligible for CRLND.

The next question then came, is CRLND always necessary when the SLNB are positive? A multi-center (41 centers), randomized study by Leiter et al. involving 5,547 patients was conducted to assess whether complete lymph node dissection resulted in increased survival compared with observation in patients with positive SLNB (16). 5,547 patients were enrolled. SLNB was positive in 1,269 (23%) patients. Only 473 (39%) of them signed up for randomization. Due to poor accrual and a low event rate the trial was prematurely closed. Two hundred and thirty-three patients were observed, and 240 patients had a CRLND. No difference in terms of progression-free survival (PFS), overall survival (OS) and distant metastasis was found.

In the light of these studies, even if SLNB is a feasible and valid technique for staging (17,18), it has no impact on disease-specific survival. As a consequence, the current recommendation in the management of melanoma is that SLNB can be performed by a trained team in a high-volume facility, particularly if adjunctive systemic therapy is being considered or in a clinical trial, specifically when tumour thickness is superior to 0.8 mm or in the presence of ulceration with tumour thickness less than 0.8 mm ulceration (7). The surgical management of loco-regional melanoma was summarize in Figure 1 (6). 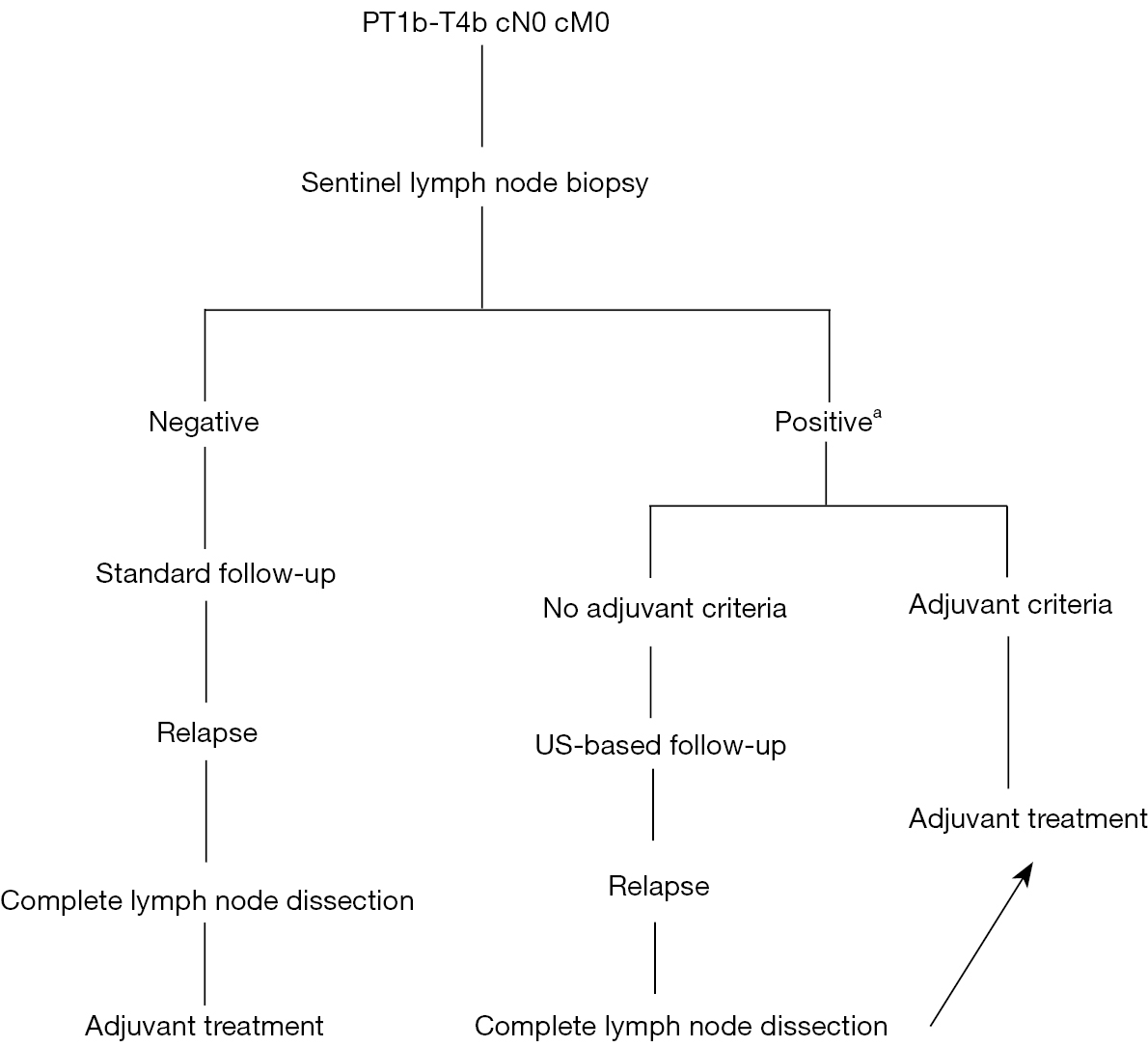 Figure 1 Treatment algorithm for stage I–III melanoma is based on ESMO recommendations (6). a, for positive sentinel lymph node biopsy patients, avoiding complete lymph node dissection is justified based on the results of the MSLT-II and DeCOG-SLT trials. US, ultrasound.

Focus on vulvar and vaginal melanomas

Vulvar and vaginal melanomas are rare cancers of the female genital tract. They are at the border between skin and gynecological cancers. There is currently very little literature for these two pathologies due to their rarity. In case of vulvar melanoma, the two cut-off points described above for cutaneous melanoma regarding excision margins and the indication of SLN can be applied to vulvar melanomas. However, since the number of published studies about SLN procedures in vaginal cancers is fairly scarce, the role of SLNB and CRLND is still unclear. Consequently, the staging used by FIGO remains clinical (19).

In breast cancer, the finding of a positive SLNB was initially an indication to perform a CRLND. After it has been shown that additional axillary lymphadenectomy doesn’t improve survival (20) the recommendations have changed and systemic axillary lymph node is no more indicated in these cases (21-23).

In gynecologic malignancies, like in melanoma, radical surgery of the primary tumor is the gold standard. This has been proven long time ago in ovarian cancer where the absence of residual tumor at the end of surgery was recognized as a major prognostic factor affecting OS and PFS (22-26). In early stages ovarian cancer, in endometrial and cervical cancer, lymphadenectomy carries, beyond tumor burden reduction, a staging role allowing tailoring of neo-adjuvant or adjuvant treatment. In this sense and for decades, lymphadenectomy (pelvic and in most of cases para-aortic) has been considered as a mainstay in the surgical management of all stages of ovarian cancer, endometrial cancer as well as cervical cancer in spite of its related operative and post-operative morbidity. Specifically, the incidence of lymphocele and lymphedema is of 38% and 20%, respectively (27-29), the latter irreversibly altering the quality of life.

Only recently doubts have arisen after a few well-conducted randomized controlled studies failed to show a clear benefit in performing a systematic lymphadenectomy during gynecological cancer surgery (30).

In this context of doubt about the pertinence of systemic lymphadenectomy, SLNB might represent an alternative.

In pelvic malignancies, indications of SLNB as well as systemic loco regional lymphadenectomies are still evolving. There is evidence that sentinel lymph node status carries a prognostic significance. The rate of survival of patients with a negative SLNB is higher compared to patients with positive SLNB [90% vs. 72%, at five years respectively (31)], however until now, there is no available evidence in favor of a therapeutic role of SLNB or even loco regional lymphadenectomy in gynecologic pelvic malignancies.

It seems that we might be today at a preliminary stage of thinking concerning the potential role of both systemic loco regional lymphadenectomy and SLNB in pelvic gynecologic malignancies, while evidence has now set the stage in the management of melanoma. There is a definite need to address the most pertinent questions about the potential role of lymphadenectomies and SLNB in pelvic malignancies and to conduct large scale studies to provide answers in order to end up with robust recommendations, following the melanoma history.

Provenance and Peer Review: This article was commissioned by the editorial office, Chinese Clinical Oncology for the series “Sentinel Lymph Node Biopsy in Gynecologic Cancer”. The article was sent for external peer review.

Conflicts of Interest: All authors have completed the ICMJE uniform disclosure form (available at http://dx.doi.org/10.21037/cco-20-227). The series “Sentinel Lymph Node Biopsy in Gynecologic Cancer” was commissioned by the editorial office without any funding or sponsorship. Dr. CA served as the unpaid Guest Editors of the series. The authors have no other conflicts of interest to declare.