Meningiomas, which are derived from arachnoid cap cells, account for 20% of all cases of intracranial tumors (1). In the 2016 World Health Organization (WHO) classification, meningiomas are classified into three grades based on their histopathological features (2). Brain invasion or a mitotic count of 4 or more mitoses per 10 high-power fields (×400) is sufficient for diagnosing a WHO grade II meningioma (1). Atypical meningiomas (WHO grade II) account for 20–35% and have a slight male predominance (1). The prognosis of atypical meningiomas is worse with a 10-year progression-free survival (PFS) and overall survival (OS) rate from 23% to 78% and 50% to 79%, respectively (3). The standard care of treatment is gross total surgery, and there are no guidelines considering adjuvant radiotherapy (4).

The present study aimed to describe the clinical, histological and therapeutic data of a grade II meningioma population to investigate recurrence and survival factors. We present the following article in accordance with the STROBE reporting checklist (available at http://dx.doi.org/10.21037/cco-20-226).

We retrospectively included 216 patients treated for a grade II meningioma in six centers in France between January 2008 and December 2018. Meningioma diagnosis was confirmed according to the 2016 WHO classification. Benign meningiomas transformed into grade II were also included. We recorded the following variables: gender, age at diagnosis and tumor location. The management strategy for each patient was retrospectively assessed as follows: surgery extent (gross total resection, GTR; or subtotal resection, STR), adjuvant radiotherapy, radiation therapy and surgery at recurrence time, and systemic therapy. Adjuvant radiotherapy means radiotherapy after the first surgery regardless of extent of surgery. The quality of surgery was defined according to the Simpson classification. Total resection was defined as Simpson grade 1, 2 and subtotal resection was defined as Simpson grade 3, 4, 5.

The histological subtype, grade, grade evolution, Ki-67 proliferative index and progesterone receptor (PR) expression were also assessed. PFS time was defined from the disease diagnosis to progression confirmed by brain RMI. OS time was defined from the diagnosis to the date of death or last report. The study was conducted in accordance with the Declaration of Helsinki (as revised in 2013). Due to the retrospective and observational status of this study, approval of an ethic committee and informed consent was not mandatory.

Quantitative variables are presented with their mean and standard deviations, and they are compared with Student’s t-test when appropriate as well as the Shapiro-Wilk test or Wilcoxon’s rank test in case of non-Gaussian variable distribution. Qualitative variables are described by their absolute numbers and percentages, and they are subsequently compared using Pearson’s χ2 test or Fisher’s exact test. For multivariate analysis, we used a log-linear model with an adjustment for covariates with P<0.2 in univariate analysis or clinically pertinent to estimate OR and their 95% confidence interval. HR was calculated with a Cox regression. Survival was analyzed with Kaplan-Meier survival curves and the log-rank test. Differences were considered significant if the corresponding P value was <0.05. The ROC curve was used to define the Ki-67 threshold value. Statistical analysis was performed using R software (v3.5.1) (open source, The R Foundation @ [http://www.r-project.org]).

We retrospectively included 216 patients treated for a grade II meningioma in six French centers in France between January 2008 and December 2018. Among them, 25 recurrent grade II and 10 grade I meningiomas transformed into grade II were diagnosed at first time between 1988 and 2007 (Figure 1). The main characteristics are shown in Table 1. The median age at diagnosis was 58 years (95% CI, 55–59), and the median follow-up was 6.7 years. Total and subtotal resection were performed in 122 (56%) and 59 (27%) patients, respectively. For 35 patients (16%), the extent of surgery was not known. Adjuvant radiotherapy with a median dose of 60 Gy was performed in 45 cases (21%). Among them, 24 patients (53%) were treated with intensity modulated radiotherapy (IMRT). Data considering radiation therapy procedure used in the other 24 patients are missed data. Overall, 99 (46%) of the patients relapsed after the first surgery. Among them, 18 patients had adjuvant radiotherapy. At time of recurrence, use of radiotherapy was higher for patients who did not receive radiotherapy after the first surgery (75% versus 33%, P=0.003), while those treated with adjuvant radiotherapy underwent more surgery (75% versus 50%, P=0.065) or systemic therapy (44% versus 7%, P=0.008). Fifteen patients received systemic therapy mainly based on bevacizumab [7], sunitinib [2] chemotherapy hydroxyurea [2] and temozolomide [1] or somatostatin analog [3]. 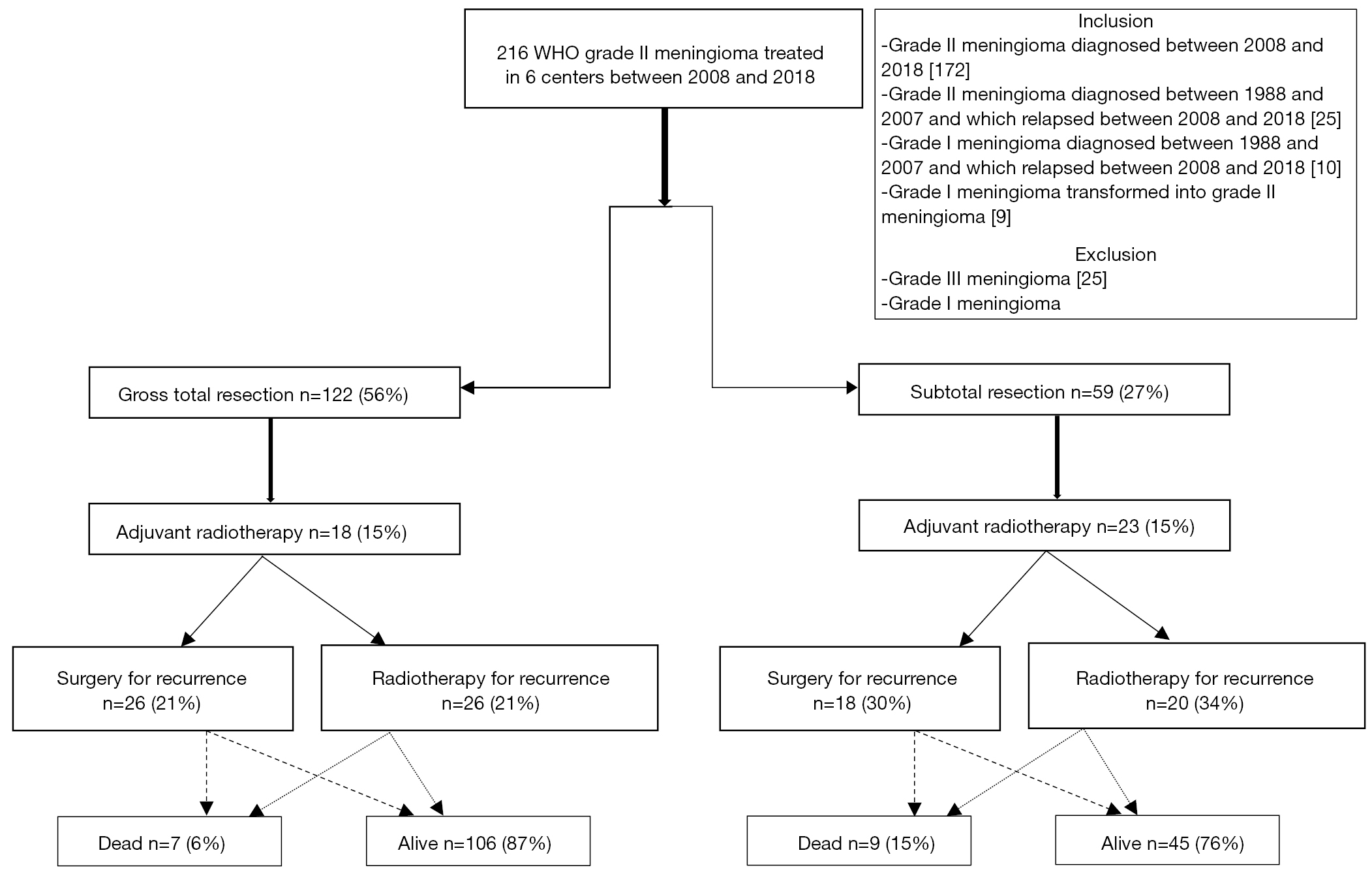 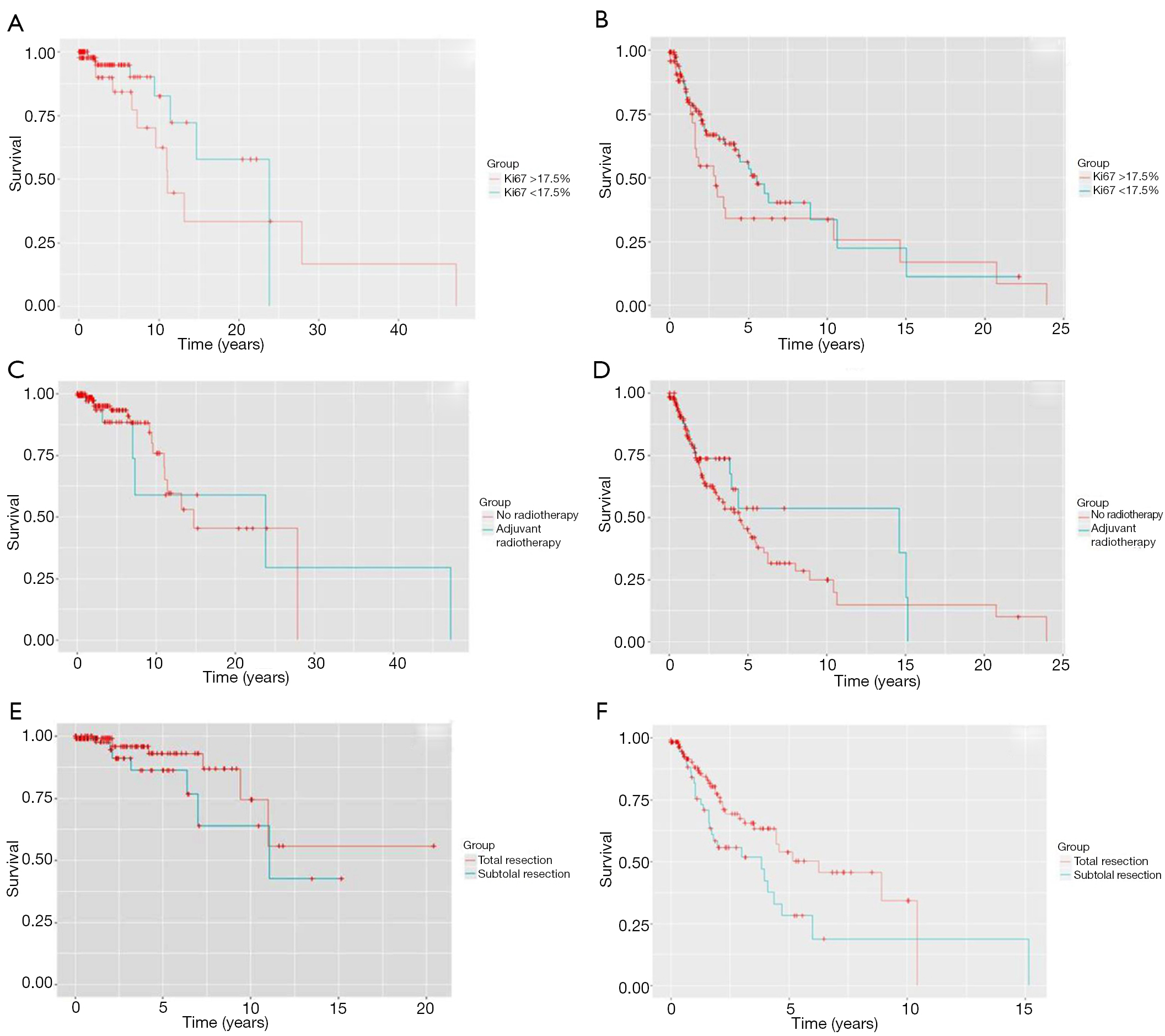 This study utilized a large sample size and reported prognostic factors of recurrence for grade II meningioma. Grade II meningiomas are aggressive tumors due to a high risk of recurrence. The median PFS and OS times in all patients were 4.6 years (95% CI, 3.5–5.5) and 14.7 years (95% CI, 11.7–NA), respectively. Several studies have reported similar outcomes considering PFS (median between 4.0 and 4.4 years) (5-7) and OS (median between 12.4 and 19.0 years) (8,9).

We reported a recurrence rate of 46% with a 22-month median time of recurrence. Some previous studies have reported a lower recurrence rate from 32% to 37% with a 24-month median recurrence time. This difference may be explained by the rate of patients with Simpson grade I/II or gross total resection from 65% to 100% compared to 56% in the current cohort (5,10-12). Another retrospective study reported a higher overall recurrence rate, reaching 64%. Indeed, this difference may be explained by more aggressive histological features (Ki-67 over 9.9%, high cellularity, increased nucleus/cytoplasm rate, and necrosis), and 57% of the patients in the previous retrospective study had a subtotal resection compared to 27% in the current study (8).

Previously reported data have shown large variability in recurrence rates. The extent of surgery and features of pathology are likely the reasons for the variations. Indeed, we observed these factors as recurrence prognosticators.

According to the multivariate analysis, the Ki-67 proliferative index was the only recurrence factor with a threshold value of 17.5%. Literature data considering prognostic value of Ki-67 remains controversial. In a retrospective study including 30 atypical meningioma, Ki-67 rate was not significantly an unfavorable factor of recurrence (P=0.5) (17). Hsu et al. observed similar result regardless of histological grade (18). In both studies, Ki-67 cut-off was low (8% and 3.2%, respectively). On the other hand, several retrospective studies including between 50 and 205 atypical meningiomas reported a statistically significant correlation between Ki-67 rate and recurrence (5,10,17,19-21). Except Kirn et al. study, all those studies had a Ki-67 threshold between 10% and 15%. Considering literature data, Ki-67 rate seemed to be an unfavorable factor of recurrence in atypical meningioma with elevated expression of this proliferative index. The lack of a consensus definition of cut-off value is the main contributor toward heterogeneity.

The inhomogeneous postoperative treatment due to the lack of definitive guidelines reflected worldwide difficulties in finding a clear conclusion from the various published series.

Grade II meningioma is a variant of meningioma with a high risk of recurrence. A high Ki-67 index, subtotal resection, negative PR expression and histological grade evolution negatively influenced the recurrence rate. Patients treated with adjuvant radiotherapy often had a more aggressive meningioma. Despite these unfavorable factors, the median OS and PFS times were longer for these patients. Large prospective studies are needed to determine a consensus for optimal adjuvant therapy.

Reporting Checklist: The authors have completed the STROBE reporting checklist. Available at http://dx.doi.org/10.21037/cco-20-226

Conflicts of Interest: All authors have completed the ICMJE uniform disclosure form (available at http://dx.doi.org/10.21037/cco-20-226). The authors have no conflicts of interest to declare.

Ethical Statement: The authors are accountable for all aspects of the work in ensuring that questions related to the accuracy or integrity of any part of the work are appropriately investigated and resolved. The study was conducted in accordance with the Declaration of Helsinki (as revised in 2013). Due to the retrospective and observational status of this study, approval of an ethic committee and informed consent was not mandatory.