Epidemiology of gallbladder cancer in the Unites States: a population-based study

Gallbladder cancer (GBC) is a rare malignancy, ranking 22nd and 17th among cancers worldwide in incidence and mortality respectively (1). Nevertheless, it is the most common neoplasm of the biliary tract, accounting for 80–95% of all neoplasms of the biliary tract system (2). Most GBCs are adenocarcinomas that arise from the epithelial lining of the gallbladder and its carcinogenesis follows a progression through a metaplasia-dysplasia-carcinoma sequence. It is an aggressive tumor that usually presents late with metastasis; hence carrying a poor prognosis with a mean overall survival of 6 months after the diagnosis (2,3). In current practice, there is a lack of screening tests for GBC (4).

Current literature shows that unlike other gastroenterological malignancies, GBC is more common in women compared to men (5). It is also more common in older individuals with 72 years old being the average age of diagnosis in the US (6). It is more prevalent in certain ethnicities and regions of the world compared to others which is attributed to different environmental exposures and genetic predisposition (5,7). Interestingly, the global distribution of GBC and gallbladder stones—the most commonly cited risk factor—is found to be related (5). Other risk factors reported in the literature include a family history of GBC (8), gallbladder polyps (9), primary sclerosis cholangitis (10), chronic infections with Salmonella (11) and H. pylori (12), congenital biliary cysts (13), abnormal pancreaticobiliary junction (14), hormonal therapy in postmenopausal women (15), cigarette smoking (16), heavy alcohol drinking (16,17), and obesity (18).

There are very few population-based studies regarding this topic (3,19-22). Using a large population database, we aim to describe the epidemiology and risk factors of GBC in the US.

We present the following article in accordance with the STROBE reporting checklist (available at http://dx.doi.org/10.21037/cco-20-230).

This is a retrospective, cohort analysis using a multiple health system research platform (Explorys Inc., Cleveland, OH, USA) developed by IBM Corporation, Watson Health (23). Explorys include electronic health record (EHR) data of more than 50 million unique patients, from 26 healthcare systems with a total of 360 hospitals in the US from 1999 to date, representing approximately 15% of the population. Participating health systems are from all states and that provides a broad regional distribution of source population. Diagnoses, findings, and procedures are arranged into the Systematized Nomenclature of Medicine-Clinical Terms (SNOMED-CT) hierarchy (24) while prescription drug orders are mapped into SNOMED and RxNorm (25). Access to Explorys is granted to participating healthcare systems. The study was conducted in accordance with the Declaration of Helsinki (as revised in 2013). Source data are de-identified; therefore, Institutional Review Board (IRB) is not required. To keep patients’ information confidentiality, Explorys rounds cell counts to the nearest 10. Explorys database has been validated previously in multiple fields including surgery and gastroenterology (26-36).

Using the Explorys platform, we identified a cohort of patients diagnosed with GBC between the period of December 1999 and December 2019. The study cohort (GBC) was identified by searching the database for a SNOMED-CT diagnosis of “primary malignant neoplasm of gallbladder” after excluding patients younger than 18 years old. The control group was then identified for those who have no GBC. Subsequently, a cohort of patients with first ever GBC diagnosis was identified between the period of December 2018 to December 2019 to calculate the incidence of GBC in the last year. 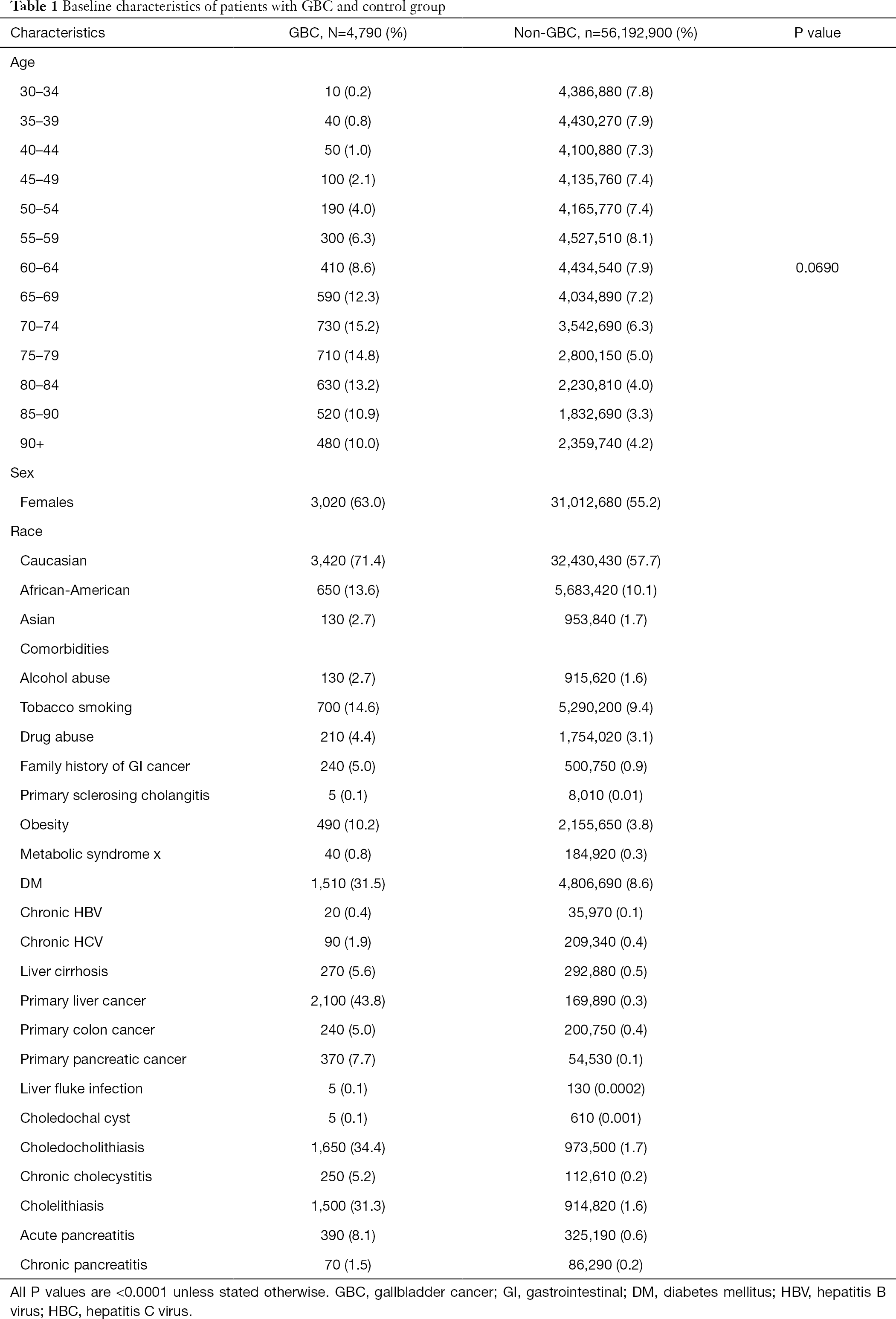 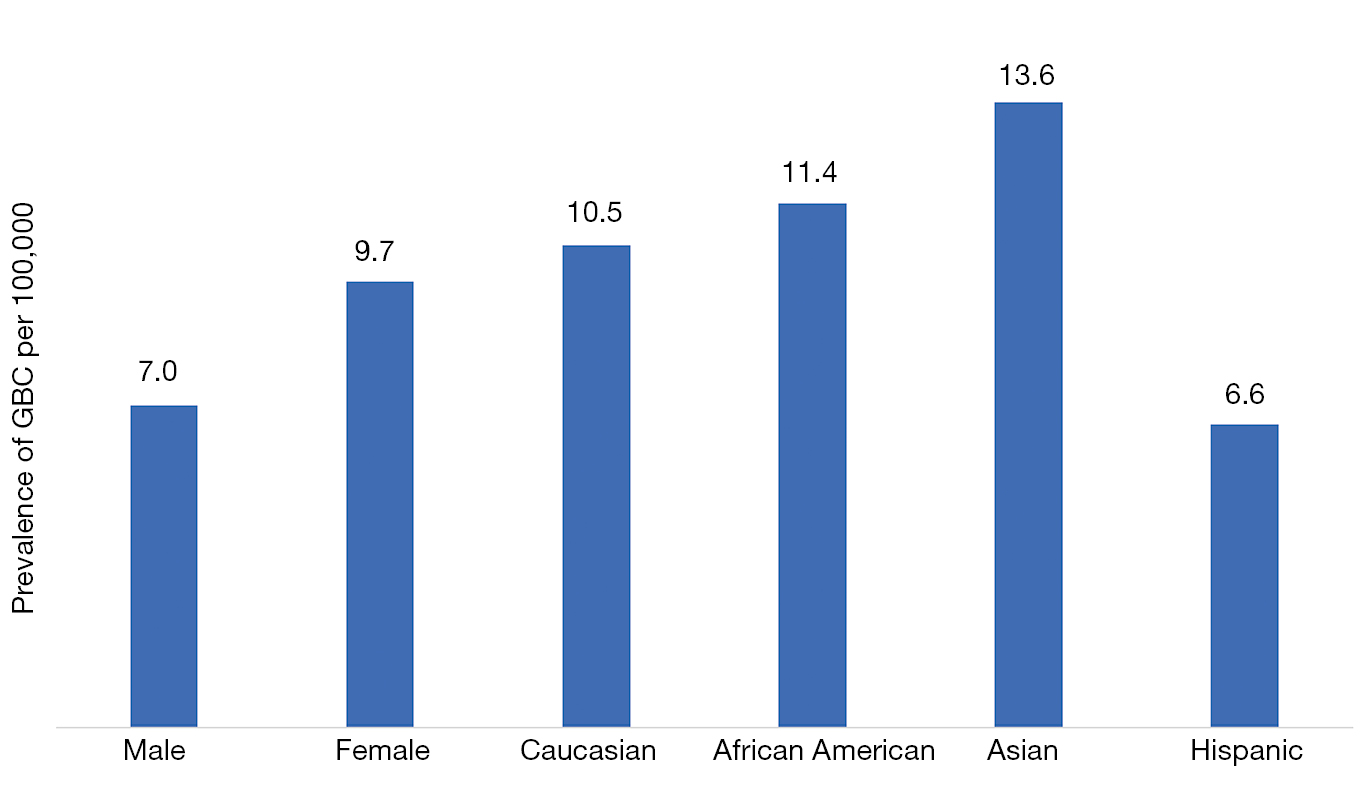 Figure 2 Prevalence rate of GBC based on sex and race. GBC, gallbladder cancer.

Patients with GBC had a higher prevalence of multiple comorbidities compared to the general population including smoking and alcohol abuse. There was significantly higher prevalence of biliary diseases such as cholelithiasis (31.3% vs. 1.6%), choledocholithiasis (34.4% vs. 1.7%), chronic cholecystitis (5.2% vs. 0.2%), choledochal cyst (0.1% vs. 0.001%), and PSC (0.1% vs. 0.01%). History of chronic viral hepatitis infections (HBV and HCV), obesity, and DM were also more prevalent in patients with GBC compared to the general population.

Risk factors for development of GBC

Our population-based study of 56 million patients showed that the 20-year period prevalence rate of GBC is 8.5 per 100,000 among the US population. In our cohort, patients with GBC were more likely to be elderly (age >65) and females.

Our study was consistent with previous epidemiologic studies in the US that showed a higher prevalence of GBC in women compared to men (22,37). GBC is considered one of the few cancers where the incidence is higher in women than men (5), this is thought to be due to a higher prevalence of gallstones in women (38). After adjusting for several factors in the multivariate analysis, we found that female gender is an independent risk factor for GBC. In our cohort, gallstone was the single most important risk for GBC, which is consistent with prior studies (5). Moreover, it is believed that the geographic pattern of GBC correlates with the prevalence of gallstones (7). Gallstone size is believed to influence the risk of GBC with larger stones (>3 cm) carrying a higher risk compared to smaller stones (39). However, despite the increased risk, the development of GBC in patients with gallstone disease remains rare (40-42). It is proposed that cholelithiasis leads to GBC through chronic inflammation and metaplasia (40). Chronic inflammation can also lead to the deposition of calcium in the gallbladder wall, a condition called porcelain gallbladder. Historically, porcelain gallbladder was an absolute indication for cholecystectomy due to the risk of GBC. However, today, the association between GBC and porcelain gallbladder is controversial (43,44).

The data on obesity as a risk factor for GBC is conflicting. Our study however, is in agreement with the previous studies that showed an increased risk of GBC in obese patients including a cohort of 181,000 individuals by Larsson et al. (45). In a systematic review of eight studies, obesity and body mass index (BMI) were significantly associated with GBC. The increased risk is thought to be related to increased predisposition to form gallstones. On the contrary, other studies have showed no association between obesity and GBC (46). Previous studies found an association between diabetes and GBC, but it was unclear whether this association was independent or mediated by obesity (47). We found that DM is independently associated with increased risk of GBC. Similarly, a recent European cohort study showed that diabetes was associated with a higher risk of GBC independent of obesity (48). Cigarette smoking and heavy alcohol use were also associated with GBC. In a prospective study conducted in Japan, there was a positive linear association observed between the risk of GBC and the number of cigarettes smoked. The study showed a linear association between alcohol drinking and risk of GBC among men as well but not in women (16). In a meta-analysis investigating the association of alcohol and risk of 23 types of malignancy, the relative risk of GBC among heavy drinkers was 2.64 (95% CI: 1.62–4.30) (17).

The indolent and non-specific presentation of GBC along with a paucity of early screening methods, and predictive radiological features often preclude early detection of GBC. Therefore, that results in difficulty in implementing curative intent surgical resection and subsequently reflects negatively on the overall prognosis. GBC remains a highly fatal cancer, with only 10% of cases presenting at a surgically resectable stage with an overall 5-year survival of 60% for localized tumors, 30% for regional spread, and 2% for distant spread (52). Despite the importance of obtaining accurate prognostic information in helping physicians to make better clinical decisions, there are limited prognostic data in GBC at the current time. In a Chinese study, Bai et al. proposed a nomogram to predict the overall survival after GBC resection (53). The nomogram suggested that the absence of jaundice, lower preoperative CA19-9 levels, lower TNM stage, and incisional margins without tumor cells correlated well with a long survival time. Using the SEER database, Wang et al. formulated two nomograms that would help predict survival for GBC receiving chemoradiotherapy (54,55). On multivariate regression analysis, the model showed that age, sex, papillary histology, stage, and adjuvant radiotherapy were significant predictors of overall survival. In a systemic review evaluating the prognostic value of DM on the survival of patients with GBC, a meta-analysis of 10 studies concluded that diabetic patients had a higher mortality of GBC (56). Extrapolating data from other cancers, smoking and alcohol abuse have detrimental effect post-cancer diagnosis as well as increased mortality (57,58).

This study has few limitations, mostly related to the use of a large database. Accurate prevalence rates of diagnoses might be affected as the database is generated from those who sought medical care. Given the de-identified nature of Explorys database, we were not able to obtain individual data regarding imaging reports and laboratory values, therefore we were not able to include patients with porcelain gallbladder or pathological data on gallbladder biopsies. Despite these limitations, the major strengths of this study lie in that it is one of the largest population-based studies to ever address GBC epidemiology and risk factors to our best knowledge. Explorys captures electronic medical record data of more than 50 million patients from all different regions of the US. In addition, SNOMED-CT allows for more concepts to be coded per clinical document compared to ICD making it more accurate in terms of documenting diagnoses and pertinent patient information. It is important to highlight that Explorys has been validated previously as a database (59) and in different specialties including gastroenterology (26-36,60,61).

Our study is in agreement with the previous literature in regards to the association of GBC with female sex, older age, gallstone disease, cholecystitis, obesity, diabetes, smoking, alcohol abuse, chronic HBV and HCV infections, family history of GBC, and PSC. This is the largest US study to-date demonstrating incidence rate higher than previously reported. GBC is a rare disease with a poor prognosis. GBC epidemiology is an evolving and is constantly reshaped by several factors including lifestyle, geographic, and diet. The clinician must keep a high index of suspicion of GBC in patients with the risk factors emphasized in this study for timely detection, diagnosis, and better outcomes.

Reporting Checklist: The authors have completed the STROBE reporting checklist. Available at http://dx.doi.org/10.21037/cco-20-230

Conflicts of Interest: All authors have completed the ICMJE uniform disclosure form (available at http://dx.doi.org/10.21037/cco-20-230). The authors have no other conflicts of interest to declare.

Ethical Statement: The authors are accountable for all aspects of the work in ensuring that questions related to the accuracy or integrity of any part of the work are appropriately investigated and resolved. The study was conducted in accordance with the Declaration of Helsinki (as revised in 2013). The study did not require an IRB as data is de-identified.