The benefit data for these new target drugs is still getting robust, further studies to understand more accurate molecular characterization of these tumors are needed. Clinical variables may still play a significant role in treatment deciding, which may have paradoxical meaning in comparison to other breast tumor subtypes (7). An inverse association between tumor size (TS) and pCR rate is known to be mainly evident in hormone-positive and HER2-positive tumors treated with NACT (8,9). However, the literature is not consistent regarding TNBC (10-12). In real-world studies, pCR has been reported even in high tumor burden populations, frequently observed in developing countries (13).

In this study, we retrospectively explore the influence of TS on the rate of pCR and the associated survival outcomes in a real-word cohort of patients with TNBC treated with NACT. We present the following article in accordance with the STROBE reporting checklist (available at http://dx.doi.org/10.21037/cco-20-111).

The study was conducted in accordance with the Declaration of Helsinki (as revised in 2013). The study was approved by the institutional Ethics Committee board of the Instituto Nacional de Cancer in 29/04/2016 (report number 54489016.9.0000.5274) with exemption from obtaining informed consent due to the methodology nature of the study.

A retrospective analysis was carried out on a cohort of patients treated in Instituto Nacional de Cancer from January 2010 to December 2013. Included patients were 318 years, with histological confirmation of invasive breast cancer, stage II or III, estrogen receptor (ER), progesterone receptor (PR), and human epidermal growth factor receptor-type 2 (HER2) negative (TNBC) who received NACT. Patients with bilateral breast cancer or concurrently diagnosed non-TNBC and who declined to receive definitive breast surgery were excluded.

Histological confirmation of invasive carcinoma followed ASCO/CAP guidelines and TILs presence (>10%) per the International TILs Working Group (14,15). The clinical TS was measured in centimetres; ER status, PR status and HER2 status were determined by standard immune-histochemical methods. Tumors with <1% positive cells were considered to have a negative receptor status. HER2 status was recorded as negative if there was 1+ staining. HER2 status was confirmed by fluorescence in situ hybridization (FISH) if 2+ immunohistochemical staining was present according to American Society of Clinical Oncology/College of American Pathologists HER2 testing guidelines at the time of diagnosis (16). We used the America Cancer Society classification to define BMI ranges.

pCR definition was the absence of invasive breast carcinoma both in the breast and axillary lymph nodes in the surgical excision specimen (ypT0/is/ypN0). Relapse-free survival (RFS) was considered from histological confirmation date to the evidence of relapse/death from any cause or censored event, and OS from the histological confirmation to the day of death by any cause or censored event.

Descriptive and demographic data were summarized by medians or proportions; the TS was expressed by continuous variable as median and interquartile range (IQR) and was represented by tables. Survival curves were constructed using the Kaplan-Meier method and compared using the log-rank test to obtain P values in the univariate analysis.

The analysis of descriptive and demographic factors that were associated with complete response was performed using logistic regression to obtain an odds ratio (OR), confidence intervals (CI) and P values in each univariate logistic model. The analyses were considered statistically significant when P values obtained were less than 0.05.

Stratification of the pCR in subgroups of interest by TS are shown in boxplots to evaluate graphically if there were differences between these groups. The analyses were performed using R-Studio (R version 3.3.1), packages survival, stats and ggplot2.

From the 310 TNBC patients identified between January 2010 to December 2013, 187 met the inclusion criteria. Main reason for exclusion criteria was adjuvant treatment and metastasis diagnose. The median age was 48 years and BMI 28.29 kg/m2. Invasive ductal carcinoma was evident in 181 (96.79%) patients. The median TS was 8.0 cm, with clinical T3 or T4 tumour identified in 175 patients (93.58%). A total of 139 patients (74.33%) had positive axillary involvement. Most patients received anthracycline followed by taxane chemotherapy (92.51%). Only four patients (2.13%) underwent conservation surgery and the majority received mastectomy. TILs were present in 79 patients (42.93%). The baseline characteristics are shown in more detail in Table 1. 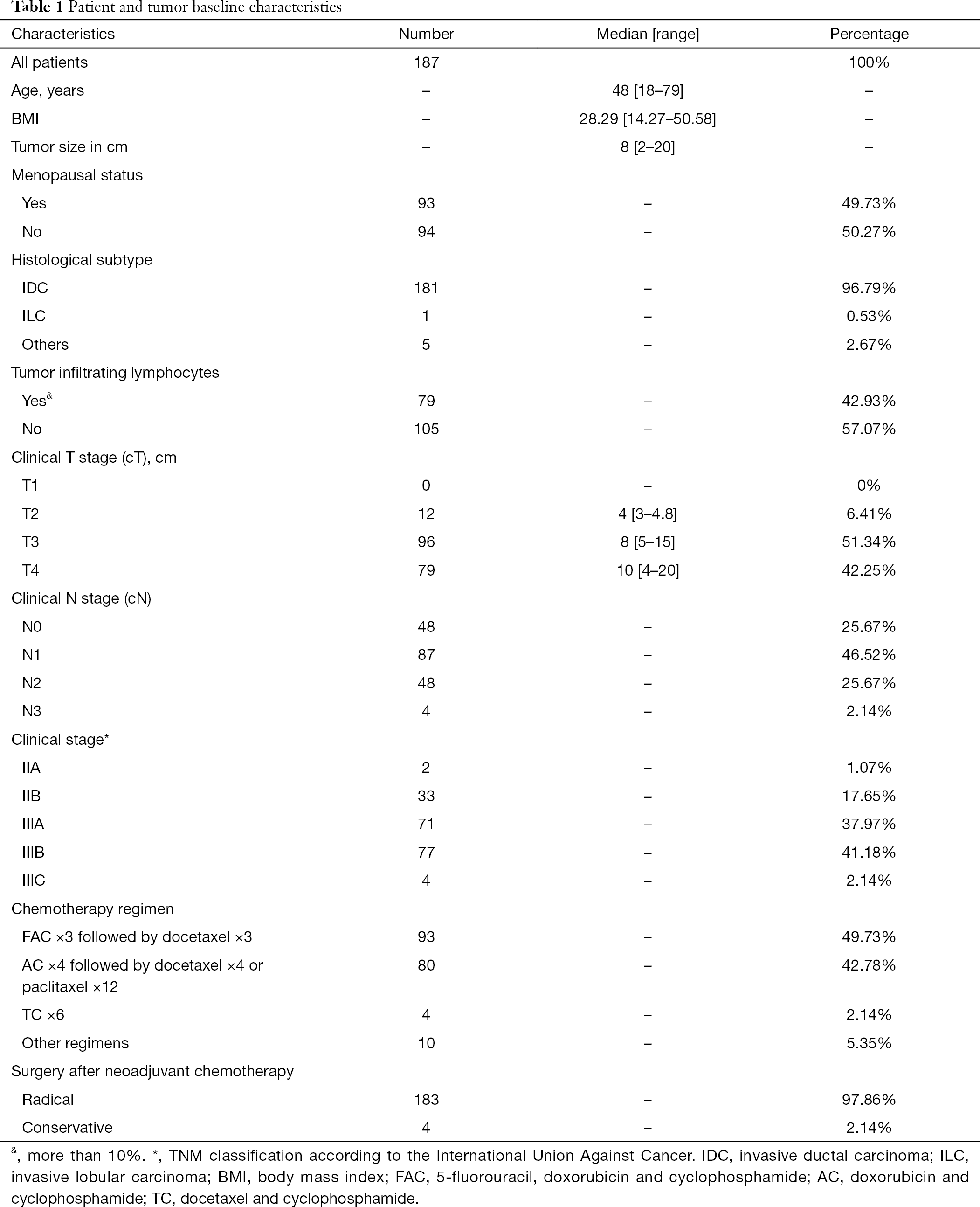 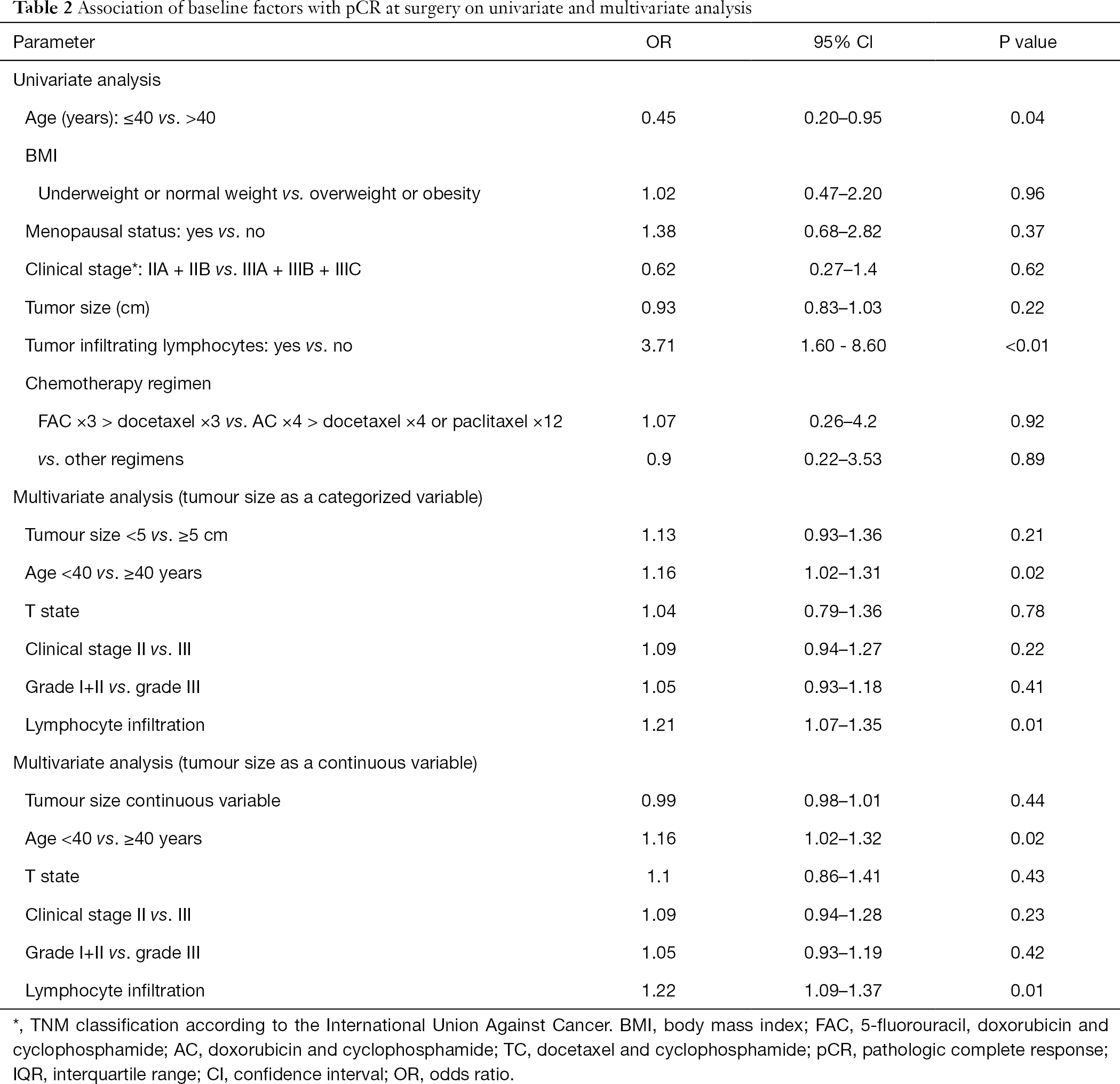 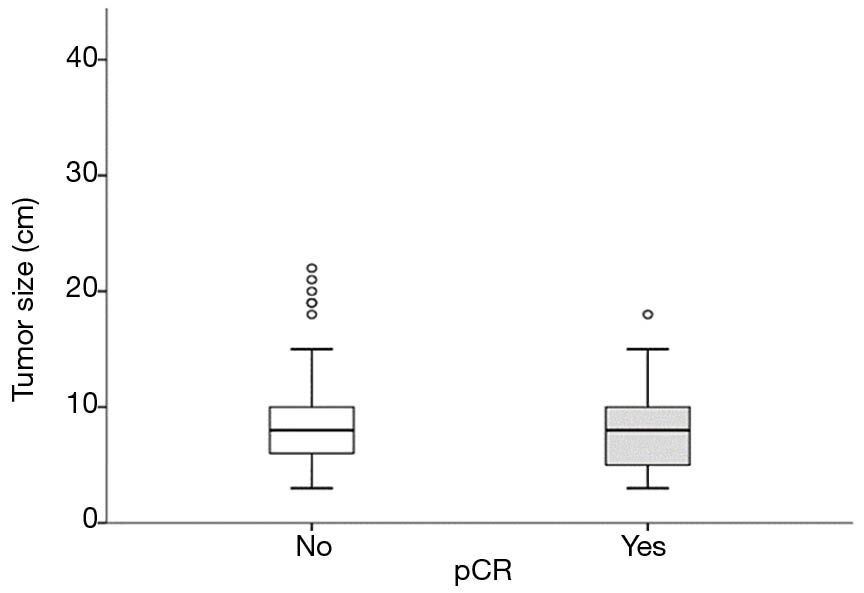 The median follow-up was 36 months. At the time of the data analysis, the median RFS (relapse free survival) had not yet been reached. The 5-year OS rate and RFS rate of the study population was respectively 71.20% and 61.10% (Figure 2A,B).

This retrospective analysis illustrates a real-world population of patients with TBNC who received anthracycline and taxane-based NACT in the public healthcare system of a developing country.

The median tumour size of 8.0 cm is double the median size reported by a pooled analysis of clinical trials (CT) performed by von Minckwitz et al., 2012 (17) and rate of T3 or T4 tumours is three times higher (Table 1). Although this might be explained by distinct inclusion criteria between CT and clinical practice (CP), it probably justifies our low rates of conservation surgeries (2.13%), tenth times lower than the 23% achieved in studies from the afore mentioned NSABP group (17).

Thirty-nine patients (21%) achieved pCR. Similar rates have been reported for the same chemotherapy regimen and nationality (17-19). In a multi-centre, real-world study from Italy, Gamucci et al. 2018 (20), showed double the pCR rates with similar chemotherapy regimens (42.6%). However, this discrepancy could be justified by their limited number of node positive patients (19.7% versus 74.39% in our cohort) and their frequent administration of concomitant anthracycline-taxane chemotherapy (56.3% versus none of our patients).

The median 8 cm TS did not predict pCR (IQR: 4; P=0.22, OR 0.93, 95% CI, 0.83–1.03) in our studied population, in accordance with other published patient cohorts (8-10). Due to the high heterogeneity of TNBC and how this population is evaluated in CT, most pCR clinical predictors studied did not achieve the necessary levels of positive and negative predictive value to be implemented (21).

This suggests that other factors should be taken into account to predict tumor response than TS, such as intrinsic molecular subtypes (22). However in an unexpected comparison to other studies, our results showed that patients over 40 years (P=0.04, OR 0.45, 95% CI, 0.20–0.95) were more likely to reach pCR (23).

The best molecular evidence currently used has shown a correlation with increased pCR rate in TNBC and high levels of TILs before NACT (24). Our results corroborate with this statement, where TILs presence was found to be significantly associated with an increased rate of pCR (P<0.01, OR 3.71, 95% CI, 1.60–8.60). Despite this, TILs is not a proven biomarker in isolation, as there are reports of patients with low levels of TILs who still achieve pCR (24).

The pCR rate in the literature varies from more than 50% in studies with newer strategies such as immunotherapy (25,26), dose-dense chemotherapy with platinum agents’ and/or bevacizumab studies (7,27-34) and parp-inhibitors (35,36) to around 25% in robust, pivotal trials of sequential anthracycline taxane regimens (16,18). Additionally, published studies include a very limited proportion of T4 tumours and some still use the historical separation of pCR in breast and axilla (32).

The importance of total dose-intensity chemotherapy delivered for breast cancer in the adjuvant setting has been widely recognised for more than 20 years (37), and the preferred regimen as NACT in TNBC in the last decade has been anthracycline and taxane-containing regimens. Our study is consistent with a metanalysis published in 2014 by Wu et al. (38), reporting a higher pCR rate with administration of chemotherapy regimens containing 6 or more cycles, however, no difference in pCR rate between different anthracycline and taxane containing regimens.

This is a retrospective study with limitations inherent to bias control and confounding factors. Nevertheless, the 5-year period of observation and the fact that data has been derived from a cohort of unselected “real world” represent the major strengths of our work, illustrating that the size of the primary tumor seem does not impact directly on the rate of pCR with NACT administration in TNBC.

Some studies have been carried out in order to determine molecular predictive factors of pCR, but without definitive success. It seems to us that for such a complex molecular subtype of breast cancer, the best method moving forward is to consider a focus on the tumor microenvironment, by understanding the communication between the extracellular matrix and surrounding cells (39). This strategy may enable identification of new biomarkers or targets in stromal components to respectively predict clinical outcomes and guide therapy in TNBC (40).

Preoperative TS did not impact pCR rate in our ‘real world’ cohort of patients, however achievement of pCR proved to be a solid surrogate biomarker of survival outcomes in our TNBC population. Better predictive tools and intrinsic molecular evaluation are ungently awaited in TNBC to help in the decision to escalate, de-escalate treatment or to incorporate new targeted therapies into the management of this complex tumor subtype.

We acknowledge the patients from National Cancer Institute Brazil and daily efforts of staff to contribute for the improvement of breast cancer care.

Reporting Checklist: The authors have completed the STROBE reporting checklist. Available at http://dx.doi.org/10.21037/cco-20-111

Conflicts of Interest: All authors have completed the ICMJE uniform disclosure form (available at http://dx.doi.org/10.21037/cco-20-111). The authors have no conflicts of interest to declare.

Ethical Statement: The authors are accountable for all aspects of the work in ensuring that questions related to the accuracy or integrity of any part of the work are appropriately investigated and resolved. The study was conducted in accordance with the Declaration of Helsinki (as revised in 2013). The study was approved by the institutional Ethics Committee board of the Instituto Nacional de Cancer in 29/04/2016 (report number 54489016.9.0000.5274) with exemption from obtaining informed consent due to the methodology nature of the study.