GEMSTONE-302: “If you keep doing the same thing you get the same result”

Lung cancer is the leading cause of cancer-related mortality globally (1,2). Over the last decade, the treatment of advanced non-small cell lung cancer (NSCLC) has changed dramatically with the emergence of immune checkpoint inhibitors (ICIs). A growing number of phase III clinical trials have demonstrated that the first-line combination of ICIs with standard chemotherapy improves survival outcomes in patients with metastatic NSCLC, regardless of programmed death-ligand 1 (PD-L1) expression (3-7).

Sugemalimab is a fully human, full-length anti-PD-L1 immunoglobulin G4 (IgG4) monoclonal antibody that is developed for the treatment of various advanced solid tumors and lymphoma (8). The GEMSTONE-302 trial did what has been done in numerous trials over the past 5 years. It was a randomized, double-blind phase III clinical trial, demonstrating that the addition of sugemalimab to chemotherapy significantly improved survival outcomes among patients with treatment-naïve metastatic NSCLC without actionable genomic tumor alterations including epidermal growth factor receptor (EGFR) mutations and anaplastic lymphoma kinase (ALK) rearrangements. Based on the encouraging results of GEMSTONE-302, sugemalimab plus chemotherapy has been approved for the first-line treatment of metastatic squamous and non-squamous NSCLC without EGFR and ALK mutations in China (9). Did we really expect a different result? Herein, we will compare the efficacy and safety data of GEMSTONE-302 to other clinical trials that led to several ICIs being approved for the first-line treatment of metastatic NSCLC in the US (Table 1) (3-7).

Baseline characteristics, efficacy, and safety of GEMSTONE-302 compared to currently approved immune checkpoint inhibitors plus chemotherapy as the first-line treatments for metastatic NSCLC in the US

The GEMSTONE-302 trial included patients from 35 Chinese centers, with squamous histology consisting of 40% of the study population in both the sugemalimab and placebo arms. The primary endpoint was progression-free survival (PFS), and the secondary endpoints included overall survival (OS) and objective response rate (ORR) (10). Four hundred and seventy-nine patients with histologically confirmed metastatic squamous and non-squamous NSCLC, regardless of PD-L1 expression level, were randomly assigned 2:1 to the sugemalimab arm (n=320) and the placebo arm (n=159). Patients in the sugemalimab arm received sugemalimab plus platinum-based chemotherapy (carboplatin and paclitaxel for squamous, or carboplatin and pemetrexed for non-squamous NSCLC) for four cycles, followed by either sugemalimab (squamous) or sugemalimab plus pemetrexed (non-squamous) as the maintenance therapy. Patients in the placebo arm received placebo plus the same platinum-based chemotherapy regimens for four cycles, followed by maintenance therapy with either placebo alone (squamous) or placebo plus pemetrexed (non-squamous). Among the patients in the placebo arm, crossover to the sugemalimab arm at the time of progression was permitted.

In a perfect world, multi-regional clinical trials (MRCT) remain the optimal approach. How should we interpret and apply a trial like GEMSTONE-302 done exclusively in China to populations elsewhere? Data from clinical trials should not be overlooked solely due to the geographic location, however, potential intrinsic and extrinsic factors are important factors to consider (16). In the GEMSTONE-302 trial, there was a higher proportion of nonsmokers compared to other similar trials (26.7% vs. 7.3–15.6%), which reflected the higher prevalence of NSCLC in nonsmokers compared to former or current smokers in the Asian population (17). It has been reported that EGFR mutations occur more frequently in the East Asian population (30–60%) than in the western population (7–10%) (17-20), but patients with EGFR mutations were excluded from the GEMSTONE 302 study. Aside from ethnicity, ECOG and smoking status, the study population of GEMSTONE-302 was generally consistent with chemoimmunotherapy studies in first-line treatment of metastatic NSCLC conducted in the US (Table 1). The GEMSTONE-302 applied similar pathology guidelines, staging system, inclusion/exclusion criteria, adverse events grading system and response evaluation criteria compared to other similar trials conducted in the US. It should be noted that the placebo arm in GEMSTONE-302 was platinum-based chemotherapy without concurrent ICIs, which is not the current standard of care for metastatic NSCLC in the US. However, platinum-based chemotherapy was the standard of care for the first-line treatment of metastatic NSCLC in China when GEMSTONE-302 was first initiated in 2018. Overall, the efficacy results of GEMSTONE-302 are in line with those reported in other phase III clinical trials evaluating chemoimmunotherapy compared to platinum-based chemotherapy alone as the first-line treatment of metastatic NSCLC (Table 1 and Figure 1). Several subgroup analyses have shown durable long-term survival benefits and comparable safety profile of first-line combined immunotherapy-chemotherapy in the Asia subpopulation with metastatic NSCLC without any driver mutations, consistent with survival benefits observed in the global studies (21-24). The safety profile of sugemalimab with combined chemotherapy is also comparable to other global studies evaluating PD-1/PD-L1 inhibitors in combination with chemotherapy. In summary, the GEMSTONE-302 study provides convincing results in the Chinese population that, we believe, are applicable to the Western population. 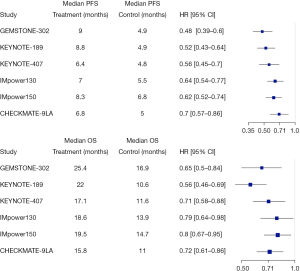 In oncology, the discussion of unmet medical needs is usually centered on the lack of available effective treatment options. We believe the immense cost is another unmet need as it can be a barrier preventing patients from accessing cancer treatments that clearly offer significant clinical benefit. The inability to secure life-prolonging cancer treatment due to financial toxicities creates disparities in the delivery of cancer care. By introducing more treatment options that are both effective and safe, we believe there would be more pressure on pricing leading to a more affordable price. This could potentially bridge the gap and fulfill the unmet needs of many cancer patients making cancer care more accessible to patients with metastatic NSCLC (25).

ICIs have revolutionized NSCLC management in China and globally (Table 1). The combination of ICIs and chemotherapy has become the first-line therapy for metastatic NSCLC since 2018 in the US, with multiple immunotherapy options available. Sugemalimab significantly improves the PFS and OS in metastatic NSCLC patients irrespective of tumor histology and PD-L1 expression levels. GEMSTONE-302 shows results similar to what has been demonstrated by the currently approved agents in the US supporting the addition of sugemalimab to chemotherapy as a novel first-line treatment option for both metastatic squamous and non-squamous NSCLC. We believe sugemalimab combined with chemotherapy could further broaden treatment options for patients with metastatic NSCLC, not solely due to its similar efficacy and safety profile compared to currently available first-line treatments in the US, but also owing to its proposed relatively affordable cost, which could fit the unmet need and ease the financial hardship among many cancer patients (25). These issues should outweigh the lack of a multi-regional clinical trial, given the consistent results of GEMSTONE-302 with other currently approved agents, which could be done as a post-marketing commitment.

Provenance and Peer Review: This article was commissioned by the editorial office, Chinese Clinical Oncology. The article did not undergo external peer review.

Conflicts of Interest: All authors have completed the ICMJE uniform disclosure form (available at https://cco.amegroups.com/article/view/10.21037/cco-22-103/coif). The authors have no conflicts of interest to declare.

Ethical Statement:The authors are accountable for all aspects of the work in ensuring that questions related to the accuracy or integrity of any part of the work are appropriately investigated and resolved.