Hepatocellular carcinoma (HCC) is a major cause of cancer-related death worldwide, with at least 550,000 deaths each year, predominantly in Southeast Asia (1). The incidence of HCC has tripled in the last three decades in the United States, and is on the rise worldwide (2). HCC can be treated curatively with surgical resection, liver transplantation, or radiofrequency ablation, but only 15% of patients are diagnosed at a stage where curative treatment is possible (3). When patients are diagnosed at an advanced stage of HCC, as are 60% of all cases, median survival times are less than 1 year. Systemic therapies have largely been unsuccessful, until the approval of sorafenib in 2007, which improved survival by 2.7 months compared to placebo (4). There have been many ongoing studies since that time looking for further targeted therapies to offer patients with advanced HCC.

HCC is a hypervascular tumor, and several proangiogenic factors play a role in HCC pathogenesis. Vascular endothelial growth factor (VEGF) has been shown to play an important role in many cases of HCC, allowing for development of new vascular supply to allow tumor growth, as well as having an important role in metastasis of tumor cells. In HCC, VEGF levels correlate with vascular invasion and metastasis, and the magnitude of VEGF changes after locoregional therapy is inversely proportional to therapeutic response (5,6). Therefore, targeting VEGF as a therapeutic intervention in patients with advanced HCC may result in prolonged survival.

Bevacizumab is an anti-VEGF monoclonal antibody that was the first angiogenesis inhibitor to be approved as an anti-neoplastic agent. It is currently indicated in metastatic colon cancer, non-squamous non-small cell lung cancer, glioblastoma, and metastatic renal cell carcinoma (7). In the treatment of advanced HCC, there were initial concerns regarding safety, especially gastrointestinal bleeding and thrombosis, however Phase II trials have shown toxicities to be manageable. It has been studied both as monotherapy, as well as in combination with the epidermal growth factor receptor inhibitor erlotinib and with cytotoxic chemotherapy. Most trials have been small, Phase II trials, and median progression free survival (3.6-7.2 months) and overall survival (4.37-13.7 months) has been variable (8-15). Table 1 summarizes the current published literature with bevacizumab. 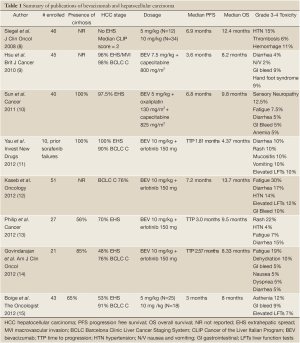 Boige et al. performed a phase II trial of bevacizumab in patients with advanced HCC, and looked at circulating endothelial cells and plasma cytokines and angiogenic factors at baseline and throughout treatment (15). Bevacizumab was given at 5 mg/kg every 2 weeks in 25 patients, and then dose was increased to 10 mg/kg in the remaining patients because disease control was seen in less than 11 patients, per their statistical design. Treatment seemed to be fairly well tolerated, and consistent with other studies, with 12% of patients having asthenia, 7% with elevation of serum transaminases and 9% with gastrointestinal (GI) hemorrhage. Notably, as in other studies, the GI hemorrhage occurred despite upper GI endoscopy and primary prophylaxis with either propranolol or variceal banding in all patients with significant gastroesophageal varices.

The patients included in this study had advanced disease, with 91% having BCLC stage C disease and 53% with metastatic disease. 65% of patients had cirrhosis, which is less than many of the other studies with bevacizumab. This may have resulted in less adverse events due to bevacizumab in this study, given that many HCC patients have underlying liver disease that will decrease tolerability to systemic agents. The response rate seen in this study is consistent with previously published data, with a progression free survival of 3 months, and overall survival of 8 months. Disease control rate at 16 weeks was 39% in patients treated with 5 mg/kg, and 45% in patients treated with 10 mg/kg, which is higher than expected, especially given the short progression free and overall survival times. 6 and 12-month overall survival was 63% and 30% respectively, which is similar to historically what is expected for patients with advanced HCC.

Biomarker analysis has recently been an area of interest, to attempt to predict response to therapy both preemptively and during treatment. This paper looks at an interesting idea of circulating endothelial cells (CEC) and plasma cytokines and angiogenic factors (CAF), both of which may be altered in patients with advanced hypervascular malignancies such as HCC. In this study, the most significant changes were seen in VEGF-A levels at all time points, which is not surprising given the mechanism of action of bevacizumab. Interestingly, change in CEC level during the first 15 days was associated with better response to therapy, and elevated baseline IL-8 and IL-6 levels were correlated with poorer prognosis. If these findings are confirmed in larger trials, measurements of these biomarkers could be helpful in clinical practice.

Overall, it appears that bevacizumab may have a role in systemic treatment of advanced HCC, but appears to have a relatively low rate of response. This will need to be confirm in larger phase III randomized double-blind placebo-controlled trials before it can be incorporated into standard of care treatment for hepatocellular carcinoma. Gastrointestinal bleeding, including variceal bleeding, continues to be a problem, and the need to perform pre-treatment endoscopic evaluation and treatment for all patients could delay therapy in some cases, especially if multiple banding procedures are required to completely eradicate varices. The most important part of this study is the biomarker exploration, and this needs further clarification with larger studies to elucidate the clinical implications.

Disclosure: The author declares no conflict of interest.