Targeted therapies, specifically tyrosine kinase inhibitors (TKIs), have redefined the standard of care for metastatic epidermal growth factor receptor (EGFR)-mutant or anaplastic lymphoma kinase (ALK)-rearranged non-small cell lung cancer (NSCLC) (1-8). The success of these agents exemplifies the current trend toward rationally designed compounds which target specific molecular alterations in cancer. The benefit associated with these agents is similar to the transformative benefit seen with imatinib in gastrointestinal stromal tumor (GIST) or with tamoxifen or trastuzumab for metastatic breast cancers (9-16). But while imatinib, tamoxifen and trastuzumab have long been employed in the adjuvant setting, targeted therapies have not been comprehensively studied in early stage NSCLC (Tables 1,2) (17-20,25-28). About half of all patients who present with potentially curable NSCLC will die from recurrent disease within 5 years (29). By comparison, 5-year survival among 200 patients with high-risk early stage KIT positive GIST treated with imatinib following surgery was 92% (18) and 5-year survival in operable ER positive or HER2 positive breast cancers treated with tamoxifen or trastuzumab is 92% (25) and 91% (26,27) respectively. It is fitting to now aim to transform adjuvant therapy of NSCLC through incorporation of targeted agents just as it has been transformed for these other diseases, but to achieve this a prospective controlled trial in a carefully selected population is needed.

Definitive study of adjuvant targeted therapy in NSCLC faces challenges. Such a trial must establish a system to prospectively identify patients with actionable genetic alterations and allocate them appropriately, as targeted therapy does not improve outcomes in unselected populations of early stage NSCLC (Table 2) (21,22). Furthermore, a successful trial must overcome the consistently low participation rate (<5%) in clinical trials among adults with cancer in the United States (30). The Adjuvant Lung Cancer Enrichment Marker Identification and Sequencing Trial (ALCHEMIST) combines the resources of the National Cancer Institute (NCI) with the broad reach of the NCTN to overcome these challenges. The NCTN, built from the previous cooperative group system, will use its academic and community centers to identify eligible patients who will agree to have tumor genotyping performed. The NCI’s Center for Cancer Genetics (CCG) will perform further genomic analysis of all samples. The ALCHEMIST design will allow comprehensive investigation of targeted therapies in resected NSCLC, and will be a platform that can grow with future therapeutic advances (Table 3).

All patients must first consent to ALCHEMIST Screening (A151216) to be considered for ALCHEMIST trials of targeted therapy (Figure 1). Patients can consent prior to surgery or after resection. Eligible patients must have completely resected non-squamous NSCLC. Tumor specimens will be tested centrally for EGFR kinase domain mutations using sequencing, and for ALK rearrangements using FISH; patients must undergo confirmatory central genotyping on study regardless of whether any local genotyping was positive or negative for EGFR or ALK. Remaining tumor tissue will be paired with blood specimens for exploratory genomic analysis by the NCI. Patients whose tumors are found to harbor EGFR mutation or ALK rearrangement will be offered enrollment onto trials of adjuvant targeted therapy. Patients not enrolled onto the adjuvant trials will be followed on ALCHEMIST screening every 6 months for 5 years. In order to advance the understanding of genomic and biological mechanisms of recurrent or resistant disease, tumor samples from any biopsies performed at the time of recurrence will be collected and studied. While it is understood that not all patients will have tissue available at recurrence for genomic analysis, it is expected that a subset of patients will undergo resection or metastectomy as part of their clinical care and therefore will have a larger specimen available for study. 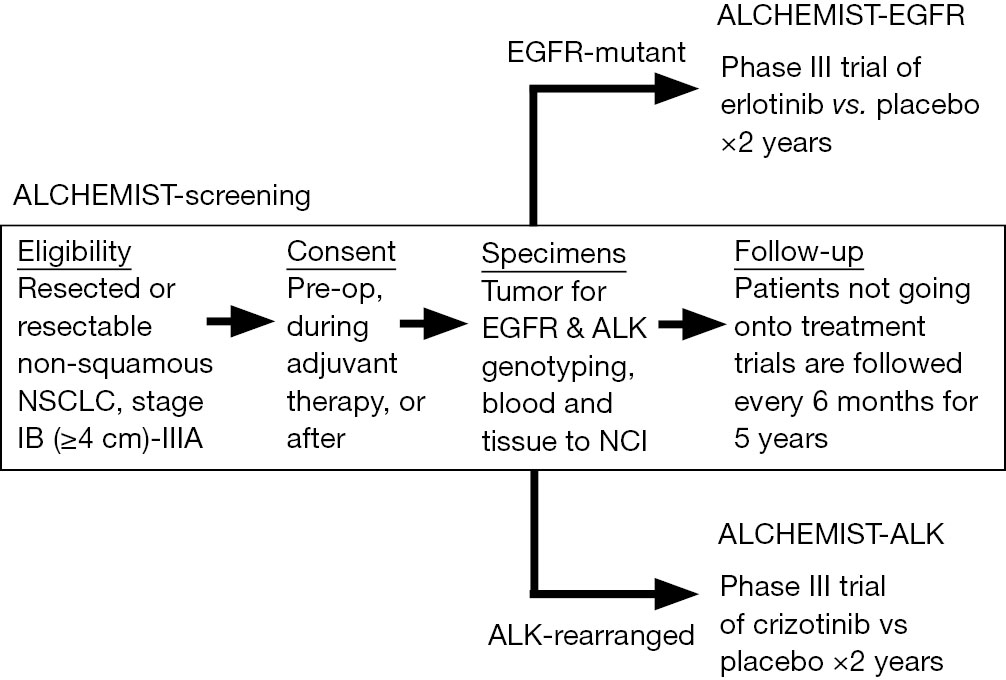 The flow of biospecimens and clinical data on ALCHEMIST are described in Figure 2. All biospecimens are logged and tracked through BioMS, and all genotype and clinical data are collected in Medidata Rave. While there were some existing integrations between the patient registration system (OPEN) and Medidata Rave, infrastructure to interface with laboratory partners (RGI, BCR) and Medidata Rave were built specifically for ALCHEMIST. As noted above and in Figure 2, beyond the predefined molecular alterations to identify potential patients for the EGFR and ALK sub-studies, full genomic characterization of submitted tissue will occur at the NCI-CCG. Regular conference calls and data exchanges between the different entities involved in ALCHEMIST ensure smooth functioning of this complex infrastructure. 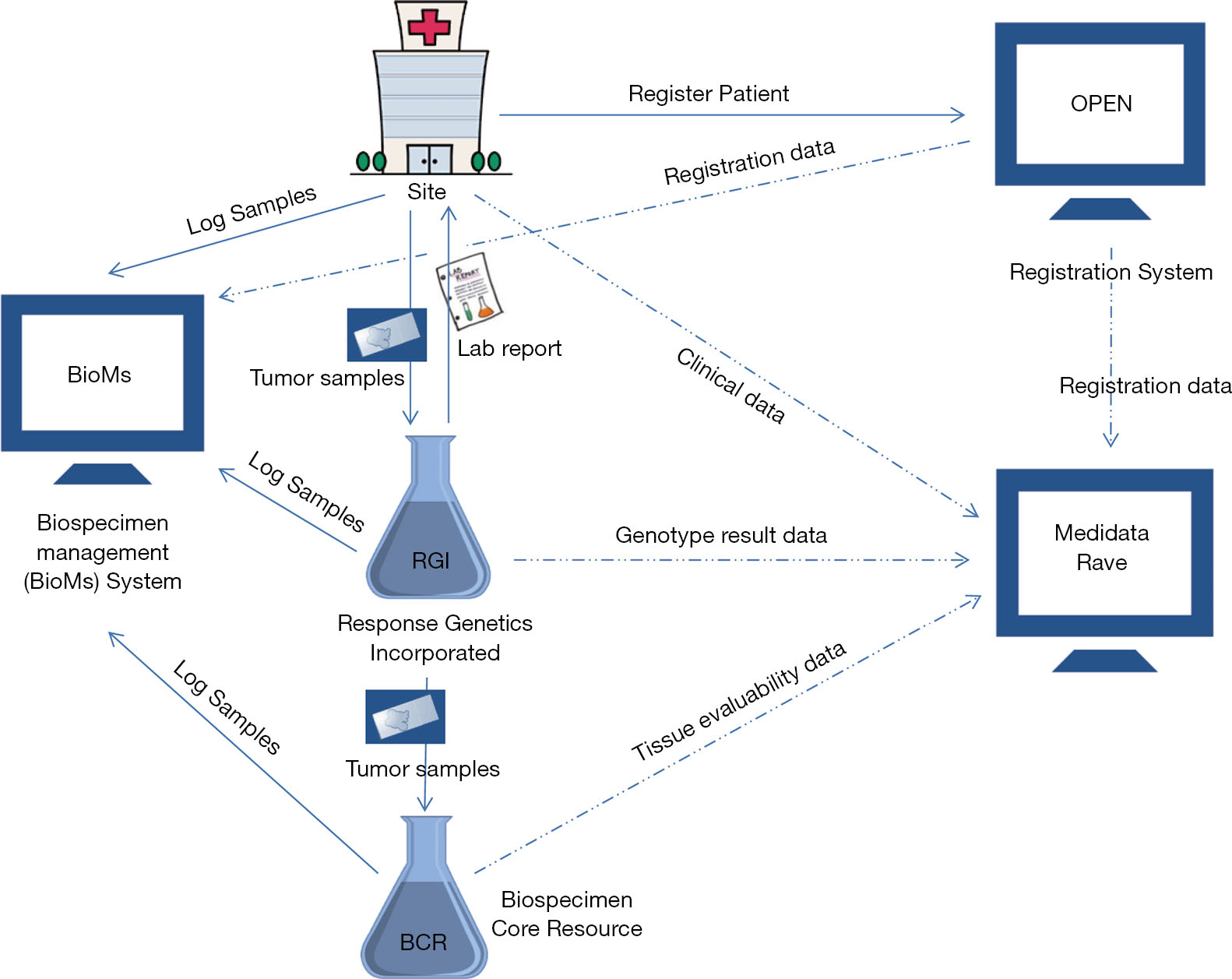 Figure 2 Systems for biospecimen and data flow for ALCHEMIST-Screening trial.

Following standard adjuvant therapy, patients with fully resected EGFR-mutant NSCLC will be randomized to erlotinib versus placebo (1:1) for two years under ALCHEMIST-EGFR (A081105). Similarly, patients with fully resected ALK-rearranged NSCLC will be randomized to crizotinib vs. placebo (1:1) for two years under ALCHEMIST-ALK (E4512) following standard adjuvant therapy. As erlotinib and crizotinib are well established standard therapies for advanced NSCLC, it is anticipated that toxicity and compliance will be manageable throughout the NCTN.

Motivated by this retrospective data, the SELECT trial enrolled 100 EGFR-mutant NSCLC patients to prospectively test the efficacy and feasibility of adjuvant erlotinib in molecularly-selected patients (24,33). Median DFS and OS have not yet been reached, but the 2-year DFS observed by the trial was 90% (n=89) (Table 2) (24). Importantly, many patients underwent dose reduction, which allowed improved compliance for the duration of adjuvant therapy. Building off the feasibility demonstrated in the SELECT trial, ALCHEMIST-Screening (A151216) in conjunction with ALCHEMIST-EGFR (A081105) will identify patients with resected EGFR-mutant lung cancer for enrollment onto a randomized, placebo-controlled trial to power definitive analyses regarding efficacy of EGFR TKI in resected EGFR-mutant NSCLC.

Phase III trials have also confirmed the efficacy of targeted TKI therapy in advanced ALK-rearranged NSCLC, but no prospective studies have examined adjuvant TKI in early stage ALK+ patients (7,8). A randomized study of second-line crizotinib vs. pemetrexed or docetaxel for ALK+ locally advanced or metastatic NSCLC demonstrated a median PFS of 7.7 months for crizotinib vs. 3.0 months for chemotherapy (HR: 0.49, 95% CI: 0.37-0.64, P<0.001) (7). These findings, combined with recent data that point to poorer prognosis for early stage ALK+ patients (34), make crizotinib an attractive option for incorporation into curative therapy for these patients. ALCHEMIST-ALK (E4512) represents a definitive trial to evaluate adjuvant ALK TKI in this subpopulation of NSCLC.

The primary objective of ALCHEMIST-Screening is to facilitate accrual to ALCHEMIST trials of targeted therapy. ALCHEMIST-Screening aims to genotype up to 8,000 high-risk early stage NSCLC patients in order to fully accrue ALCHEMIST-EGFR and ALCHEMIST-ALK, based on estimated 15% prevalence of EGFR kinase domain mutations and 5% prevalence of ALK rearrangements (7,35,36). The desired rate of accrual to the therapeutic randomized trials is 16 patients per month: ~10 patients for the ALCHEMIST-EGFR trial and ~6 per month for ALCHEMIST-ALK trial, in order to reach completion within four years.

The type I error rate (1-sided 0.05) for the two adjuvant trials is higher than the standard rate (2-sided 0.05) to accommodate the low prevalence of EGFR kinase mutations and ALK rearrangements in NSCLC and make the studies feasible. OS estimates for placebo arms for the purpose of sample size calculations were based on historical data of standard of care outcomes from unselected early stage NSCLC. It is important to note that, while there is less historical data for the standard of care outcome in early stage EGFR-mutant or ALK-rearranged patients, there are indications that EGFR-mutant NSCLC may predict a better prognosis, while ALK-rearranged NSCLC may be associated with a poorer prognosis (23,34,36,37).

If the ALCHEMIST trials of targeted therapy reach their primary objectives, genotype-directed TKIs will become an important addition to standard curative therapy for early stage NSCLC patients with appropriate molecular alterations. The results of these trials may encourage further study of highly active targeted agents as part of curative therapy for NSCLC. For example, a trial studying adjuvant PD-1 inhibition is in development as part of the ALCHEMIST effort. Tissue collection and analysis through ALCHEMIST-Screening may also reveal new molecular targets, and may in turn pave the way for novel therapies to be studied in the adjuvant setting for appropriate populations.

Funding: Research described in this publication is supported by the National Cancer Institute of the National Institutes of Health under Award Numbers U10CA180821 and U10CA180882 (to the Alliance for Clinical Trials in Oncology).

Conflicts of Interest: GR Oxnard has received consulting fees from Astra Zeneca and Boehringer Ingelheim and honoraria from Chugai.