Left-sided pancreatic adenocarcinoma (PDAC) is a particularly deadly disease that is often considered more lethal than cancers arising from the head (1,2). In some studies, authors have even questioned the role of surgery for left-sided PDAC (3,4). However, long-term survival after surgical resection has been demonstrated (5-7), and surgery is accepted as an essential component in modern treatment protocols (8). Several variations of the standard distal pancreatosplenectomy (DPS) have been described, most notably the radical antegrade modular pancreatosplenectomy (RAMPS) by Strasberg in 2003, which attempts to achieve wider tangential margins and complete removal of the N1 lymph node basin in order to enhance oncologic results (9-12). Classically, RAMPS involves division of the pancreatic neck, dissection of the celiac lymph nodes, posterior dissection just anterior to the adrenal gland usually including Gerota’s fascia, and splenectomy (9).

Since its initial description, RAMPS adoption has been uneven, though the procedure is preferred in many high-volume centers in Asia (13-16). PDAC’s preponderance for origination in the head or uncinate (only 15% of PDAC arise in the body or tail) (2), heterogenous disease biology, and frequent early development of metastatic disease make robust comparison of DPS vs. RAMPS via randomized controlled trial impractical. Systemic reviews of published data have been performed but are also limited in size and scope (17,18). Included studies are predominately small, single institution case series, none of which included more than 100 patients and less than half reported long-term survival data. While these pooled analyses have demonstrated improved R0-resection rate and greater lymph-node retrieval with RAMPS, it is unclear whether these oncologic surrogates translate into improved disease-free and overall survival (OS), particularly in the era of increasingly effective loco-regional and systemic therapies (19,20). This large, multi-institutional series of left-sided pancreatosplenectomy provides detailed, patient-level clinical and survival data, and addresses many of the aforementioned shortcomings of previous reports. We present the following article in accordance with the STROBE reporting checklist (available at http://dx.doi.org/10.21037/cco-20-6).

All patients who underwent RAMPS and DPS for PDAC between 2010–2017 were identified from an international dual-institution database. This database included patients treated at the Johns Hopkins Hospital (Baltimore, MD, USA) and Changhai Hospital (Shanghai, China). Patients were excluded if they underwent a minimally invasive pancreatectomy or if they received neoadjuvant chemotherapy. The Institutional Review Boards at the participating institutions approved the study. Informed consent of study participants was not required by either institution due to the retrospective nature of the review. All RAMPS were performed at Changhai Hospital and all DPS were performed at Johns Hopkins Hospital throughout the study period as part of each institution’s standard practice protocol. All RAMPS procedures included N1 lymphadenectomy (including celiac lymph nodes) and resection of Gerota’s fascia for posterior RAMPS, components that were not routinely performed in DPS.

Standard demographic and clinicopathologic data were collected from the medical record including age, gender, race, type of pancreatectomy, estimated blood loss, and the presence of multivisceral resection. Specimen-specific characteristics including tumor size, grade, perineural invasion, and margin status were also noted. R1 margin status was defined as <1 mm from the edge of the specimen. Complication data were abstracted from the medical record. OS was defined as the time interval between the date of surgery and the date of death. Recurrence-free survival (RFS) was similarly calculated as the interval between date of surgery and the date of first evidence of tumor recurrence. Surveillance protocols and indications for adjuvant chemotherapy type and duration were left to the discretion of the treating surgeon and medical oncologist.

All continuous variables were presented as mean with 98% confidence interval (CI) or median with interquartile ranges (IQRs) depending on data distribution. Categorical variables were presented as counts with percentile. The differences between continuous variables were evaluated with Welch’s t-test or Wilcoxon test, and differences between categorical variables were evaluated with chi-square test or Fisher’s exact test as appropriate. The primary outcomes, OS and RFS, were assessed with a multivariable Cox regression model. All patients were included for OS analysis. Patients who died without recurrence information were regarded as unevaluable and excluded for RFS analysis. Two-sided tests with P values less than 0.05 were considered statistically significant. 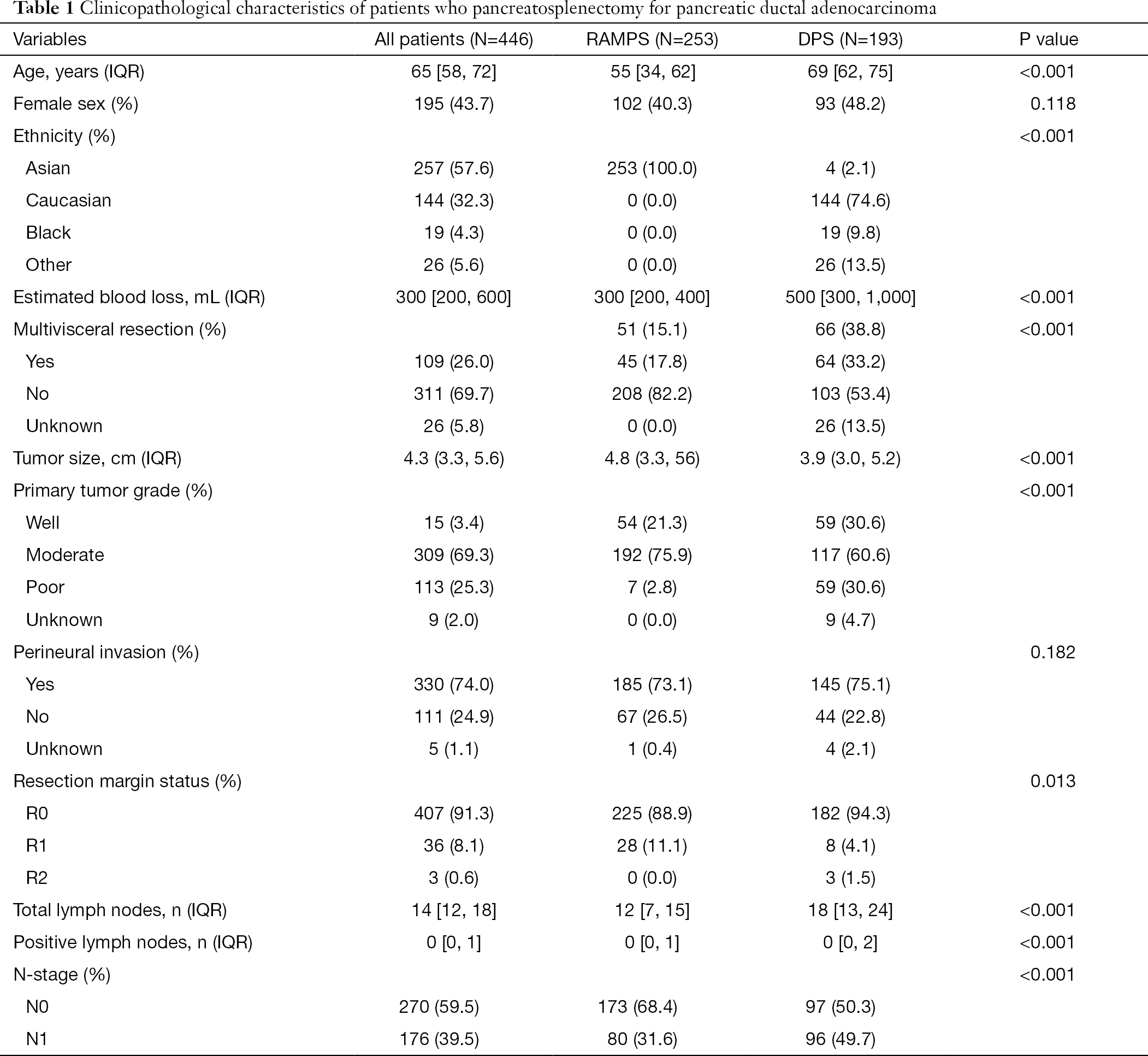 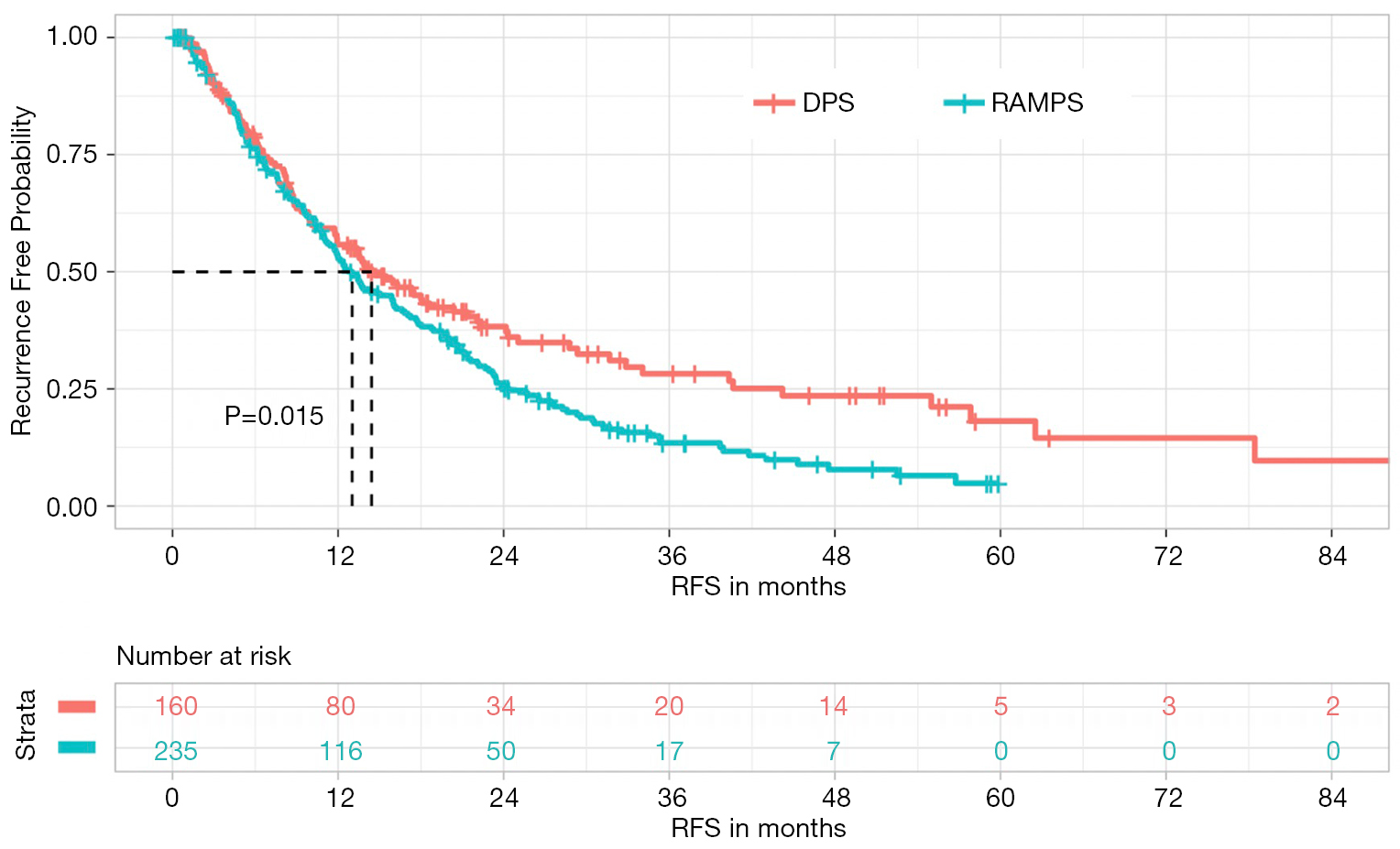 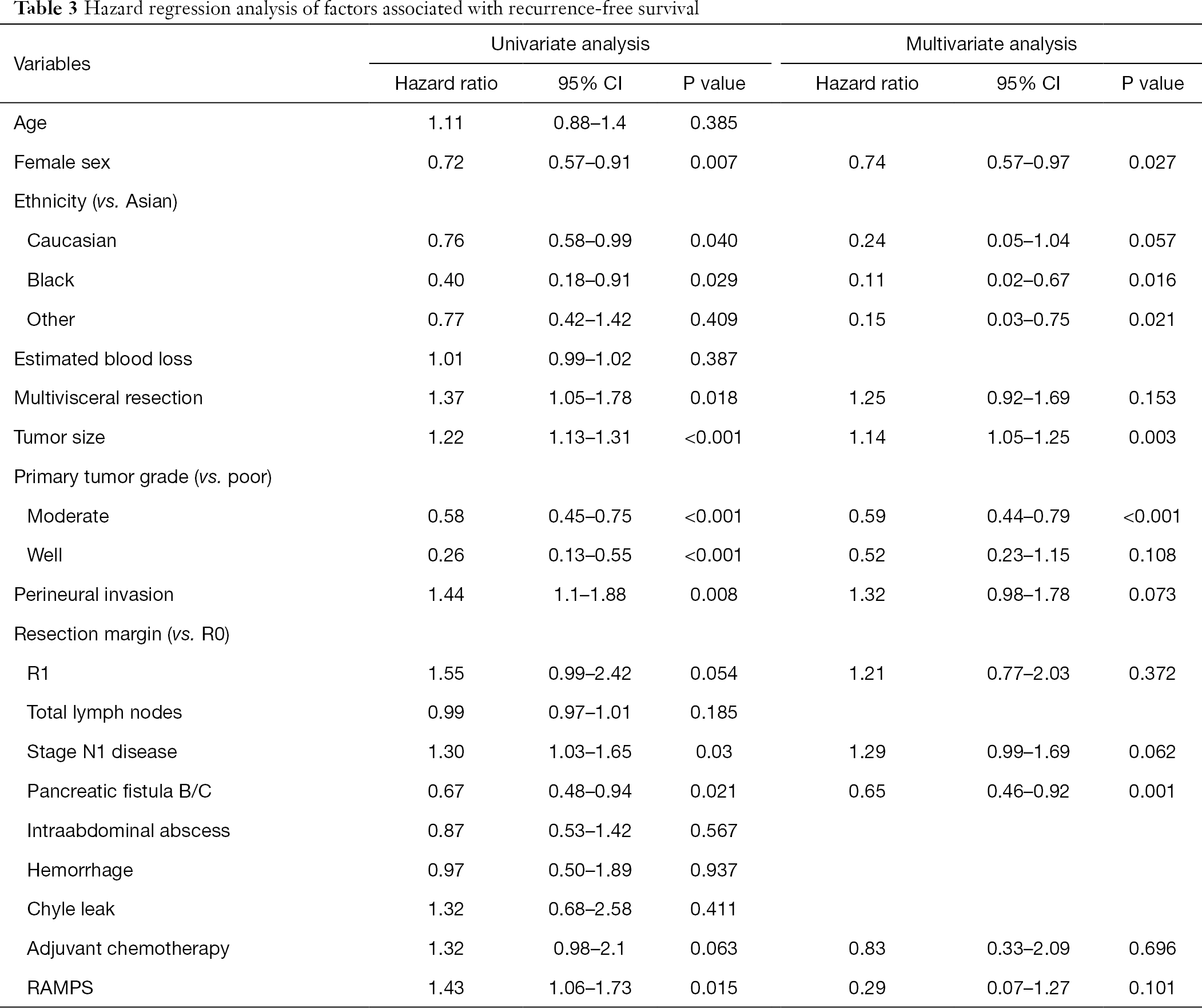 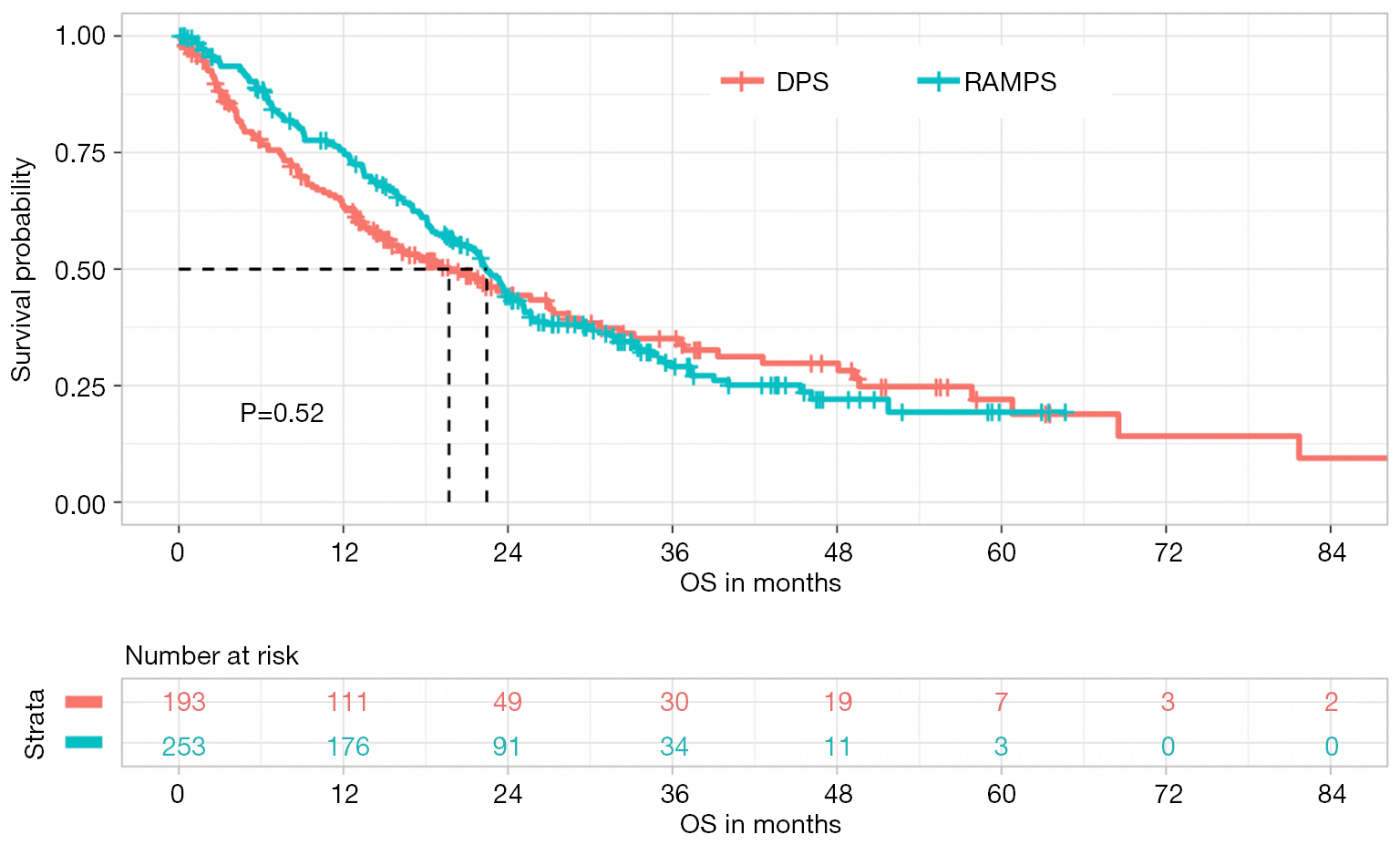 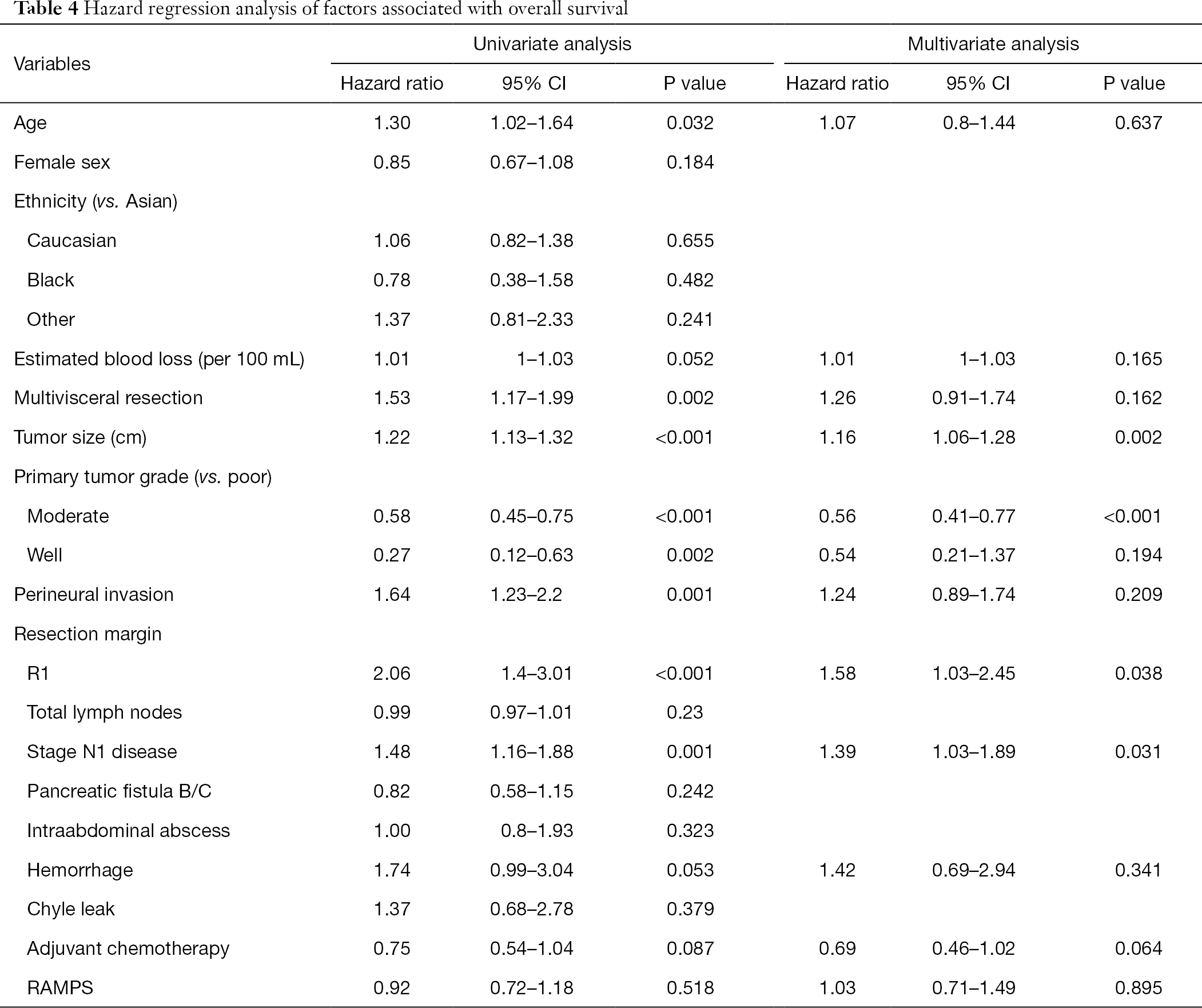 After resection, 176 (39.5%) patients were found to have lymph node metastases. Median OS was shorter in this cohort when compared with node-negative patients (16.7 vs. 23.9 months, P=0.002) (Figure 3). However, even amongst patients with node-positive disease, performing RAMPS did not alter RFS or OS. During the study period, median RFS in N1 patients undergoing RAMPS was 10.4 months compared with 11.9 months in patients undergoing DPS (P=0.21). Median OS was also statistically equivalent between RAMPS and DPS in the node-positive cohort (16.3 vs. 16.4 months, P=0.71). 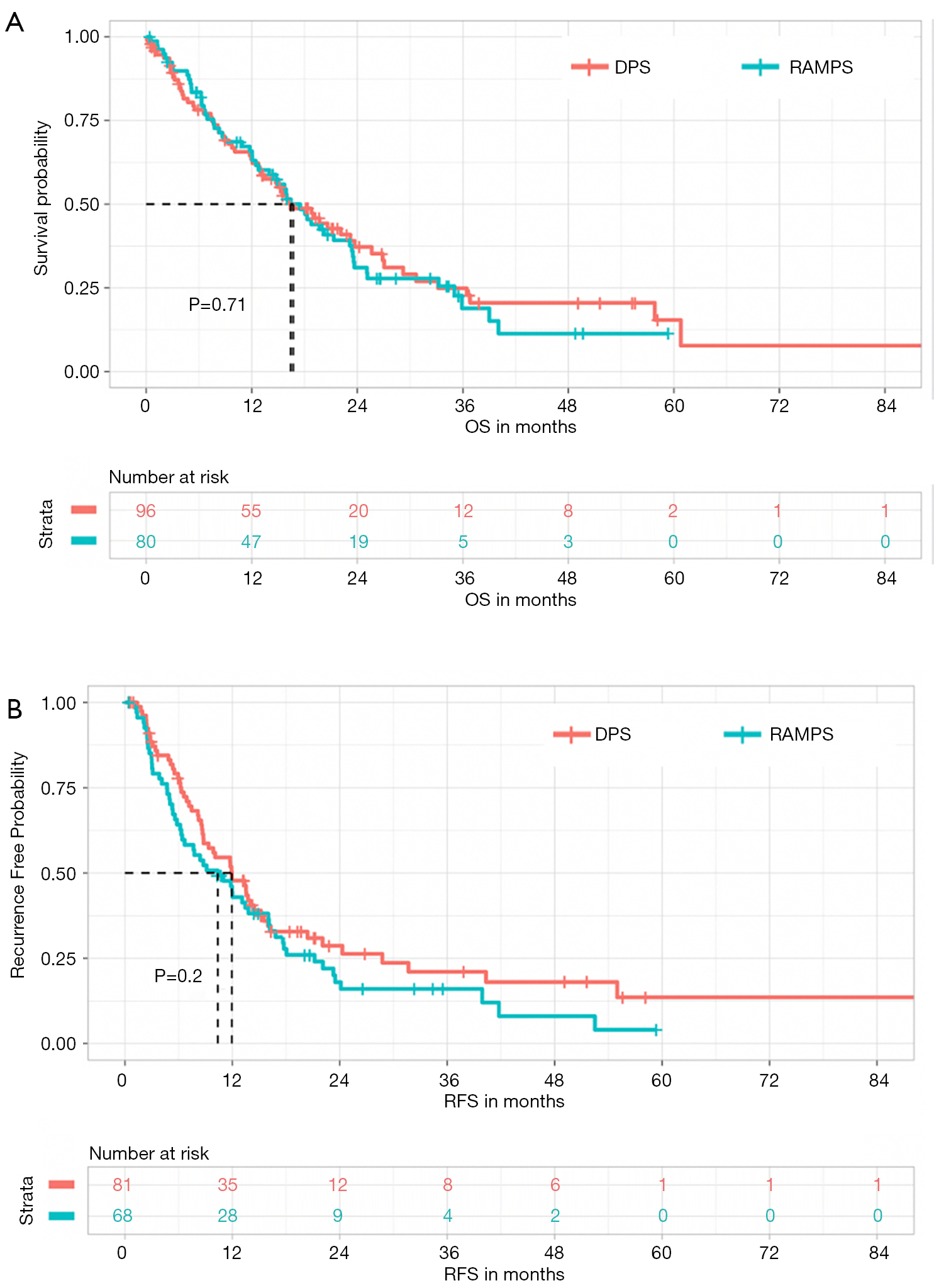 Surgery plays a vital role in the treatment of PDAC for appropriately selected patients. Despite high-quality data demonstrating a lack of oncologic benefit when performing concurrent extended lymphadenectomy with pancreaticoduodenectomy for right-sided PDAC (21,22), many centers still consider RAMPS for left-sided lesions as potentially beneficial. This is the largest multi-institutional series of left-sided pancreatosplenectomy in the literature to date and includes more patients than several published systemic reviews and meta-analyses (17,18). And while there is important heterogeneity between participating institutions, this case series design allows for detailed recurrence and survival data to be collected and compared across the study population.

Many RAMPS proponents indicate improved R0 resection rates and broader lymph node retrieval as evidence of the procedure’s oncologic benefit. Indeed, the findings of higher R0 margin rates and more total lymph nodes harvested described in previous reports (17,18) comparing the techniques were not reproduced in this study. This is most likely due to differences in the technical pathologic evaluation of surgical specimen between the two institutions. Pathologists evaluating DPS specimens utilized a standardized specimen handling protocol (23) which was not used for the RAMPS specimens, likely resulting in variable margin status and a lower reported total lymph node harvest in these patients. This is due to regional and institutional pathology practice variation and does not reflect the true scope of lymphadenectomy for the respective operations. While the actual number of lymph nodes removed during RAMPS is likely underreported, it is important to note that the median 12 (IQR, 7–15) harvested lymph nodes observed in the RAMPS cohort meets the minimum threshold set by the International Study Group for Pancreatic Surgery (24) and is greater than the median lymph node retrieval (9 lymph nodes) reported in Strasberg’s original description of RAMPS. Additionally, margin status is an imperfect surrogate for oncologic efficacy, and the ultimate independent effect of the microscopic resection margin on OS and RFS in PDAC is debated, and in some reports have shown not to significantly impact survival outcomes (25). This is likely due to the introduction of increasingly effective systemic treatment modalities which can improve survival even in the setting of an R1 resection (20).

The overall complication rate of 46.6% is comparable to average rates of 40% reported in other series (18). The increased incidence of overall complications observed in DPS patients was likely due to more robust reporting of Grade 1 complications (e.g., uncomplicated UTI). This is secondary to variability in how data for minor complications are reported at each institution, likely underreporting these complications for patients undergoing RAMPS. Unfortunately, the transfusion rate in the each respective cohort was not available for inclusion in the multivariable analysis. The only significant difference in major complication between the procedures was observed in rates of postoperative intraabdominal abscess. This increased rate of deep-organ space infections may be related to more frequent multivisceral resections in the DPS group, which is also likely the result of local surgical practice patterns. Alternatively, unmeasured patient-related microbiome, genetic, environmental, or other health-system factors may be driving this difference as the RAMPS and DPS cohorts were treated in disparate physical locations by different healthcare teams. Similar health system-related factors likely propelled the differences in adjuvant chemotherapy rates between the groups.

Without knowing specific drug, dosing, and duration data it is impossible to extrapolate the relative effects of this chemotherapy between the two surgical groups. The rate of adjuvant chemotherapy administration observed in the DPS group is similar to the nearly 70% administration rate reported after all pancreatectomies for adenocarcinoma in the United States (26). The increased adjuvant therapy rate observed in the RAMPS cohort is likely due to frequent use of single-agent treatment regimens (such as S1) which are generally better tolerated, as well as standardized adjuvant therapy in China. If RAMPS were more oncologically effective, it would be expected that the high rates of adjuvant therapy (90.5%) observed in this cohort would bias the survival data in favor of improved OS. This was not observed in the final survival analysis.

The primary study result of no difference in survival between the RAMPS and DPS cohort supports the findings of several other smaller studies (13,27,28) as well as systemic reviews (17,18). While this has been demonstrated repeatedly in broader study populations, some authors have suggested that extended resection and regional lymphadenectomy may be selectively beneficial in node positive patients (22). Our subgroup analysis of N1 patients did not demonstrate a survival benefit with RAMPS in this population. Survival in this group is more likely determined by overall disease biology and the presence of undetected micrometastatic disease, rather than the magnitude of local resection. This concept is similar to that found in other malignancies such as breast cancer, where more extensive local and regional resections do not necessarily result in improved long-term survival (29,30).

In addition to those mentioned above, the current study has several limitations. As with all retrospective studies, uncontrolled treatment allocation bias is potentially present, however mitigated by the fact that each institution only performed one type of resection. Other significant patient (genetic, socioeconomic, etc.) and health system-related (postoperative treatment, adjuvant therapy protocols, etc.) factors that may affect survival also likely differed between the groups, however were controlled for when possible. As mentioned previously, non-standardized postoperative specimen evaluation makes comparison of pathologic factors such as margin status and extent of nodal harvest imprecise. Additionally, the type and duration of adjuvant chemotherapy was not collected and therefore their particular effects could not be assessed.

RAMPS has an acceptable safety and efficacy profile, however it is not associated with an improvement in either RFS or OS over DPS in the treatment of PDAC. The technical approach to pancreatosplenectomy should be selected based on surgeon experience and comfort, with the understanding that long-term oncologic outcomes are primarily influenced by disease biology and systemic therapy.

Funding: This study was supported by Project of Clinical Medical Centers (Pancreatic Disease) in Shanghai 2017ZZ01009.

Reporting Checklist: The authors have completed the STROBE reporting checklist. Available at http://dx.doi.org/10.21037/cco-20-6

Conflicts of Interest: All authors have completed the ICMJE uniform disclosure form (available at http://dx.doi.org/10.21037/cco-20-6). JH serves as an unpaid editorial board member of Chinese Clinical Oncology. The other authors have no other conflicts of interest to declare.

Ethical Statement: The authors are accountable for all aspects of the work in ensuring that questions related to the accuracy or integrity of any part of the work are appropriately investigated and resolved. The study was conducted in accordance with the Declaration of Helsinki (as revised in 2013). The Institutional Review Boards at the participating institutions approved the study. Informed consent of study participants was not required by either institution due to the retrospective nature of the review.